g's bookshelf: warriors - into the wild 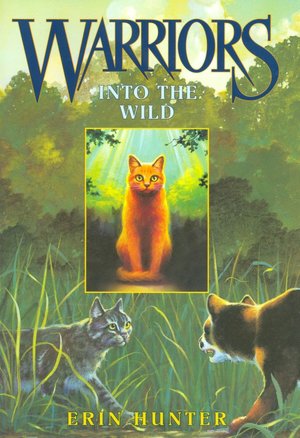 this one was painfully boring for me.  it's one looooooooong cat fight amongst a clowder of felines that take themselves way too seriously.  not seriously enough to tackle the redundancy in their word choices though.  the last 5 chapters were somewhat interesting, but after 231 pages of mewing dialogue and paw paw tongue twisters the final battle wasn't enough to redeem it.  watership down it is not.

g seemed to like it quite a bit though.  here's what he had to say, "exciting!  sad.  exciting names.  windclan went missing and shadowclan is ruled by a cruel kitty.  thunderclan has been doing the same rules for thousands and thousands of years.  tigerclaw seems nice, but he's not.  he's been trying to get rid of ravenpaw.  firepaw and greypaw took him to barley to keep him safe.  barley is a cat that doesn't live with a clan and he's not a kittypet.  firepaw defeated shadowclan's ruler, raggedstar.  when firepaw becomes a warrior, his name turns into fireheart.  i want to read the next one right away."
Posted by doris sander at 8:31 PM