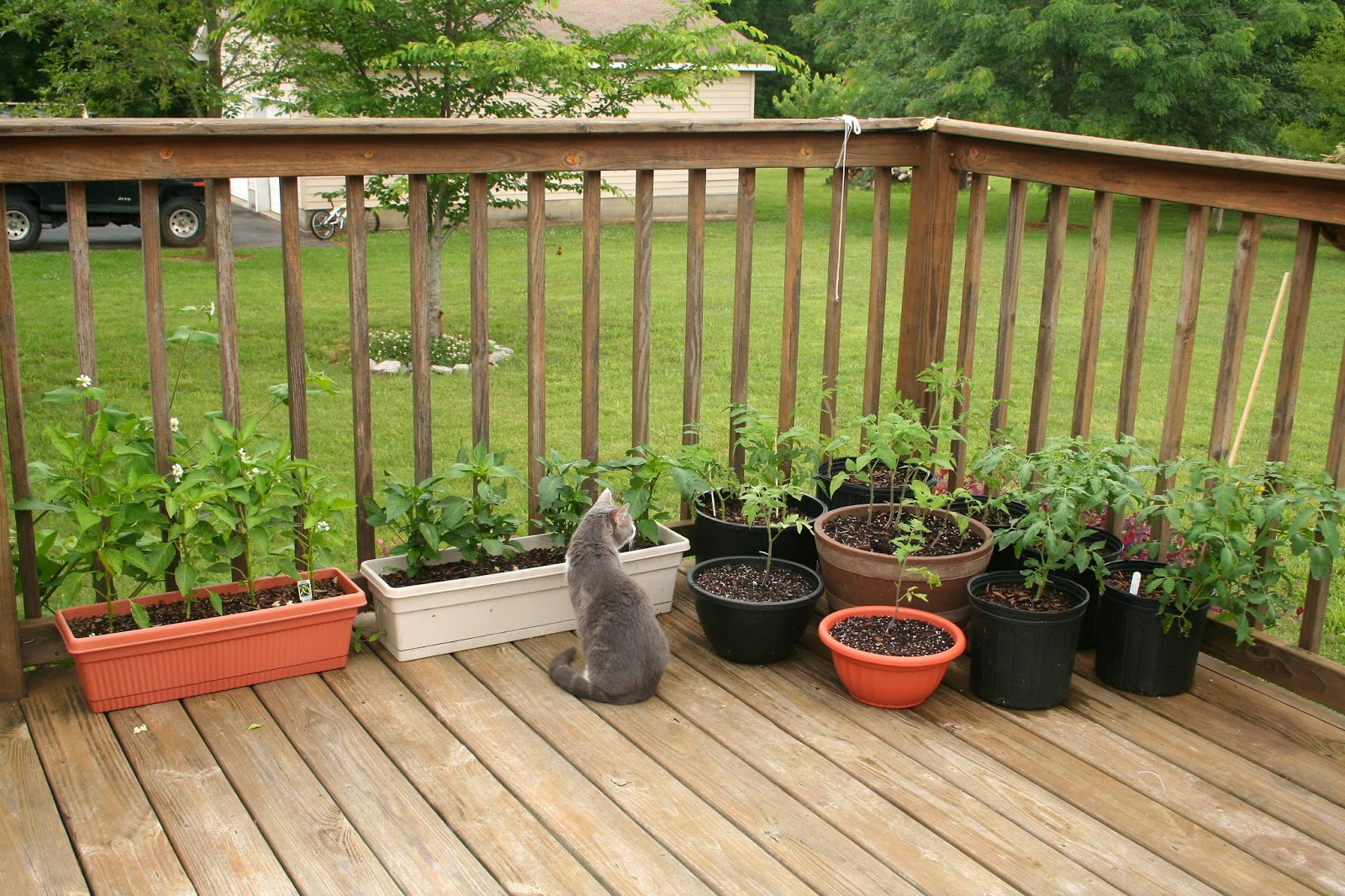 here you can see that a month later i've made quite a bit of progress.  the deck is in a much more respectable state.  chichi approves.  this is my pepper/tomato collection.  i paid a grand total of $1.00 for all these.  most are leftovers from homer's farm.  when he has had a few too many of something and doesn't feel like finding a place to plant them, he'll just give them away.  i bring them home, because i can't stand to see them die.  the neighbor has taken to calling my place the "no kill shelter for plants."  ha!  so, i got the banana peppers, rutgers, goliath, and pink girl tomatoes free from homer.  then i got the bell peppers and cherokee purple tomatoes at the last day clearance sale at the high school ffa greenhouse.

incidentally, i didn't think i liked banana peppers.  i just brought them home to save them and because i like watching things grow.  g's dad put one in the taco meat though and i thought it was fabulous.  who knew they were so good?  i guess I've always associated them with the preserved vinegar (pickled) variety and didn't think that they might be different fresh.  they are a sweet pepper and even milder than bell peppers.  perfect for adding to anything in my opinion just because they do not have a strong flavor, so you can slip more veggies in the meal without much notice.  win, win. 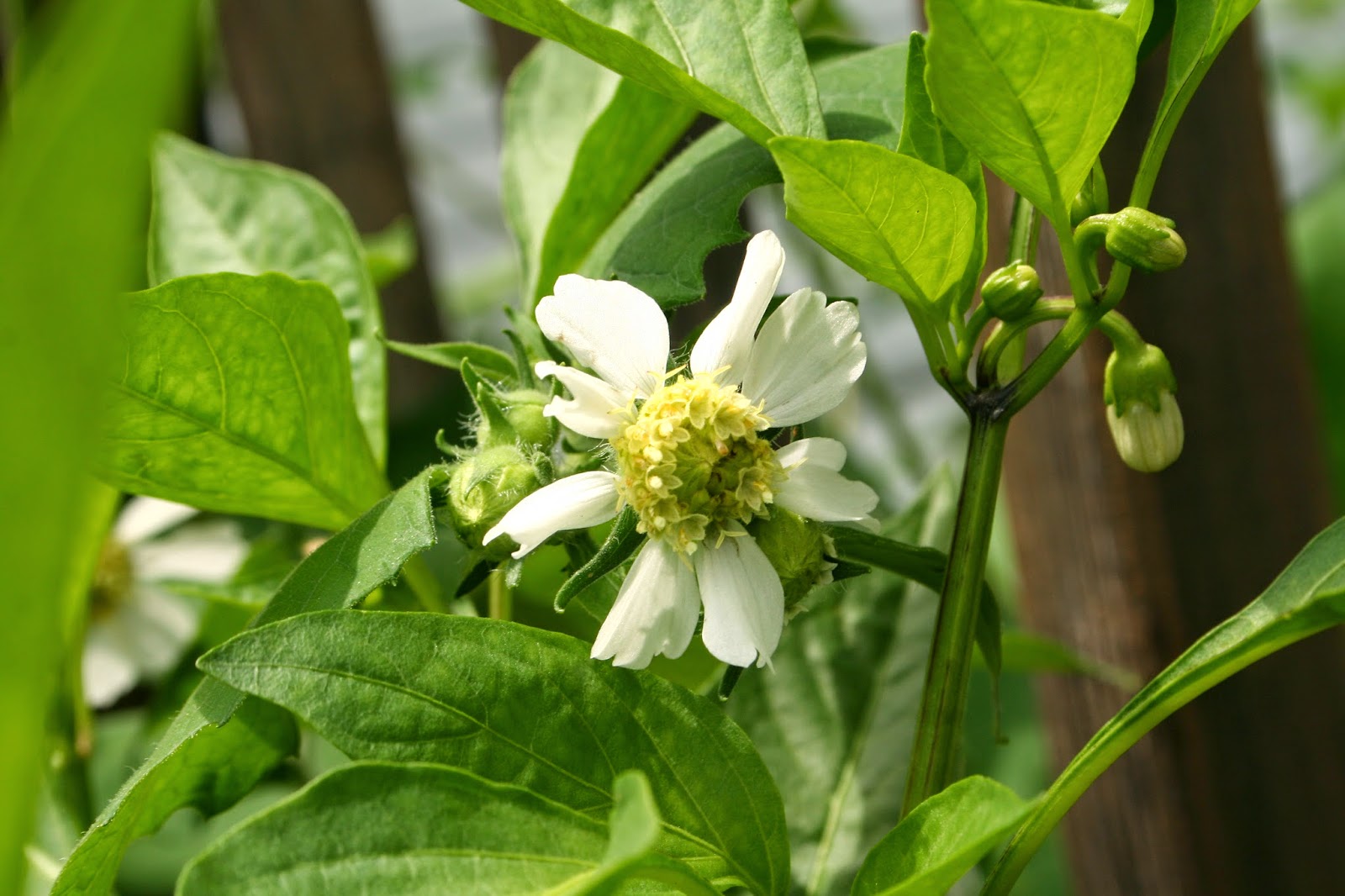 this might be a confusing mix if you don't know what you're looking at.  it's actually a weed growing up and blooming behind the bell peppers.  i have a bad habit of letting interesting weeds grow just to see what they'll become. 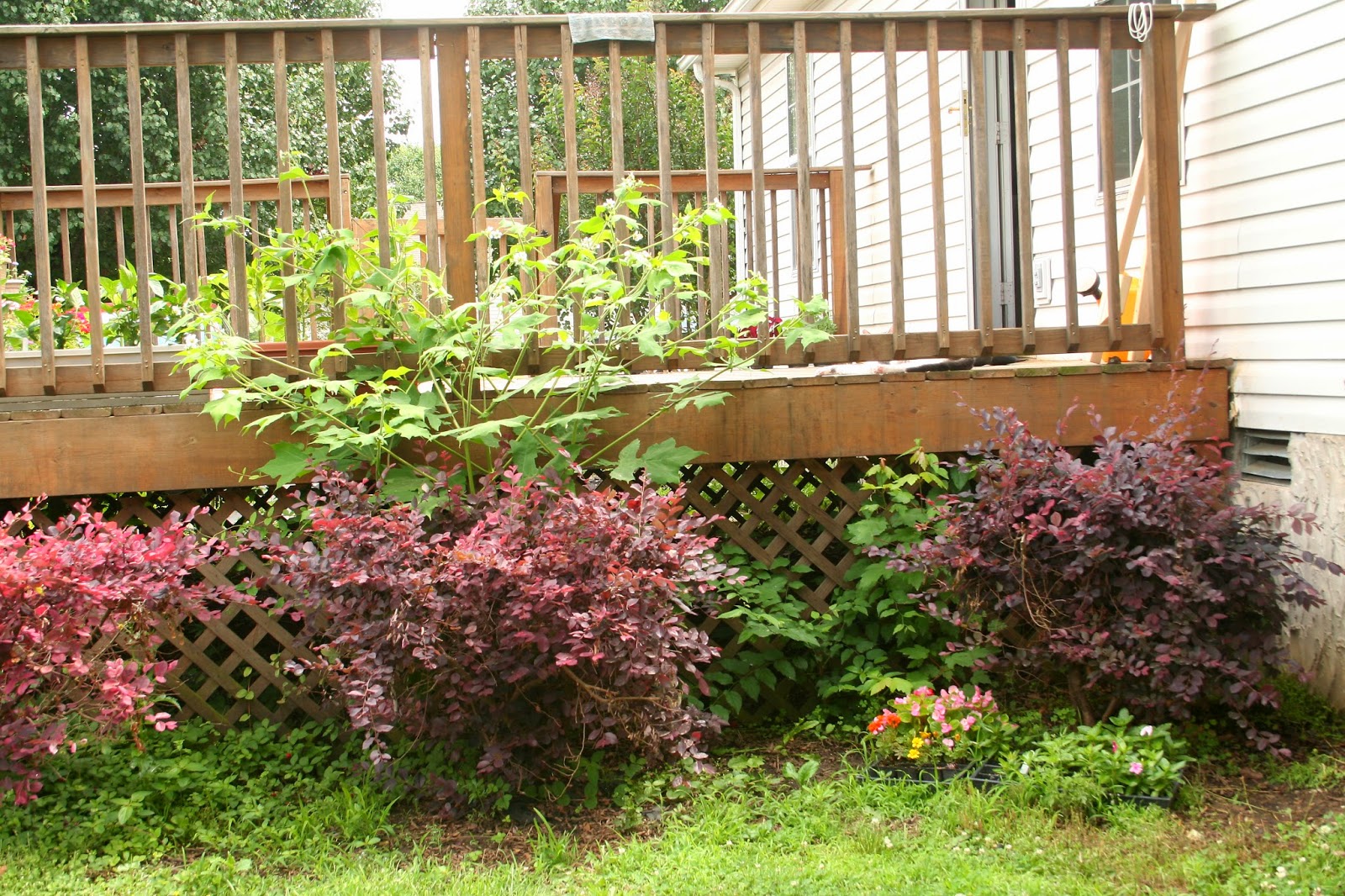 this is what it became, lol.  i cut it down shortly after this picture.  i figured the neighbor was getting tired of looking at its awkwardness.  on the ground there is the rest of the high school ffa clearance sale.  i badly need to get those in the ground. 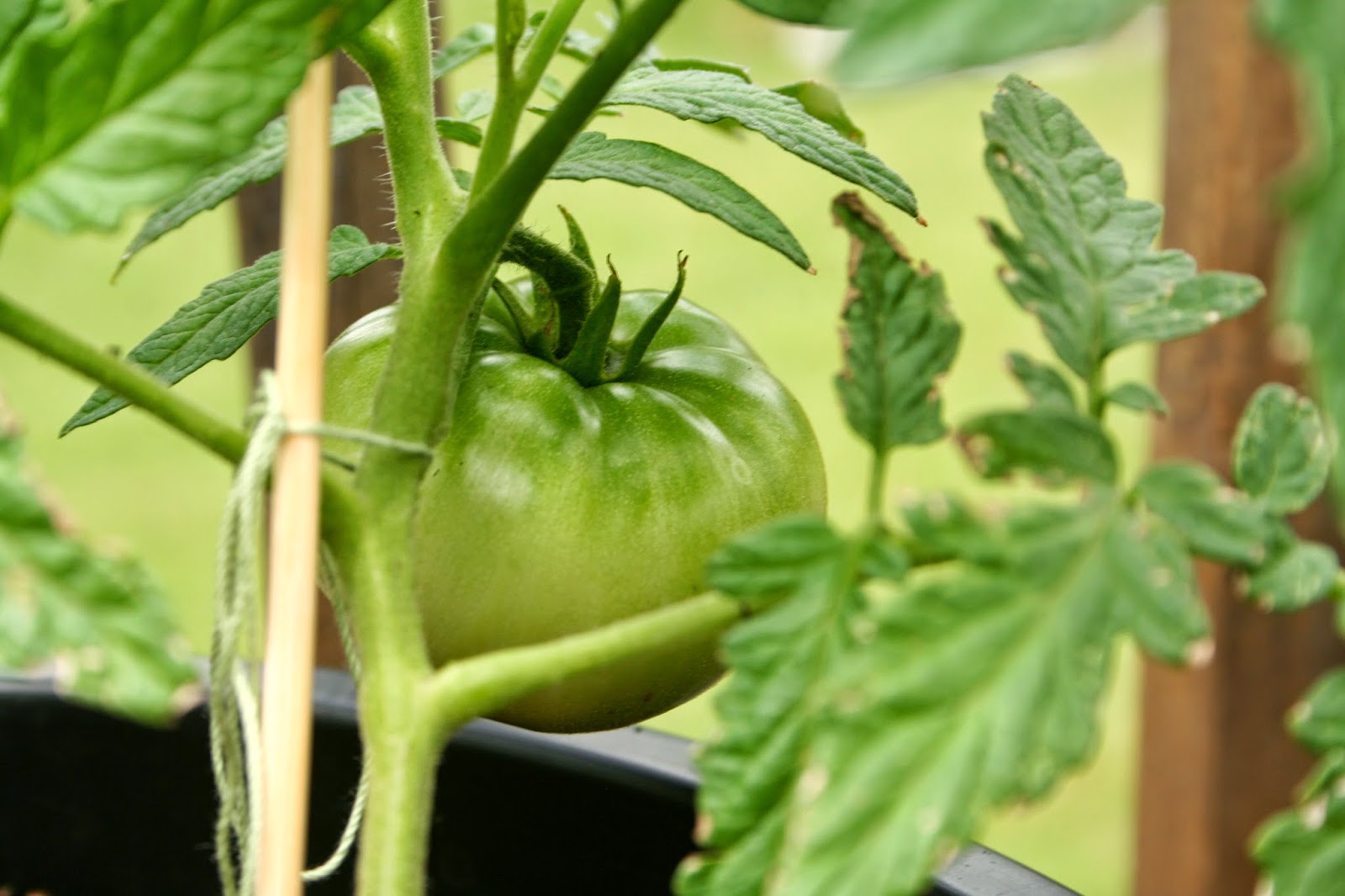 tomato!  actually, big enough and ripe enough for fried green tomatoes, but i'm waiting for it to ripen all the way.  it will be my first of the season. 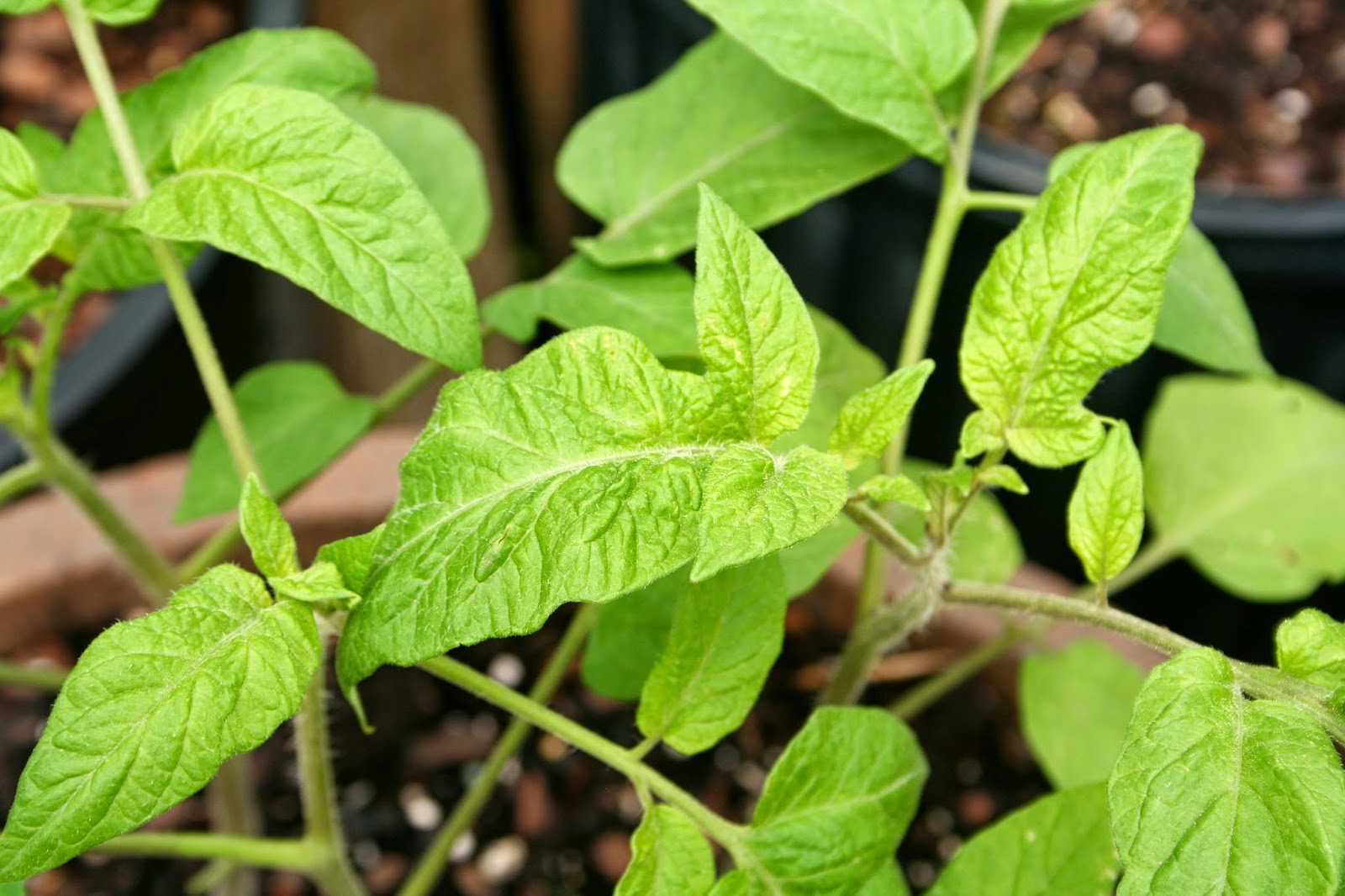 i had not seen tomato leaves like these before.  homer gave me two sets of plants one day, but didn't remember what they were.  they were either goliath, cherokee purple, or pink girl.  since i already had the first two in my stash, i assumed this one was the pink girl.  google-ing it proved me right.  curious to see what the tomatoes look like when they ripen.  the plant is thriving. 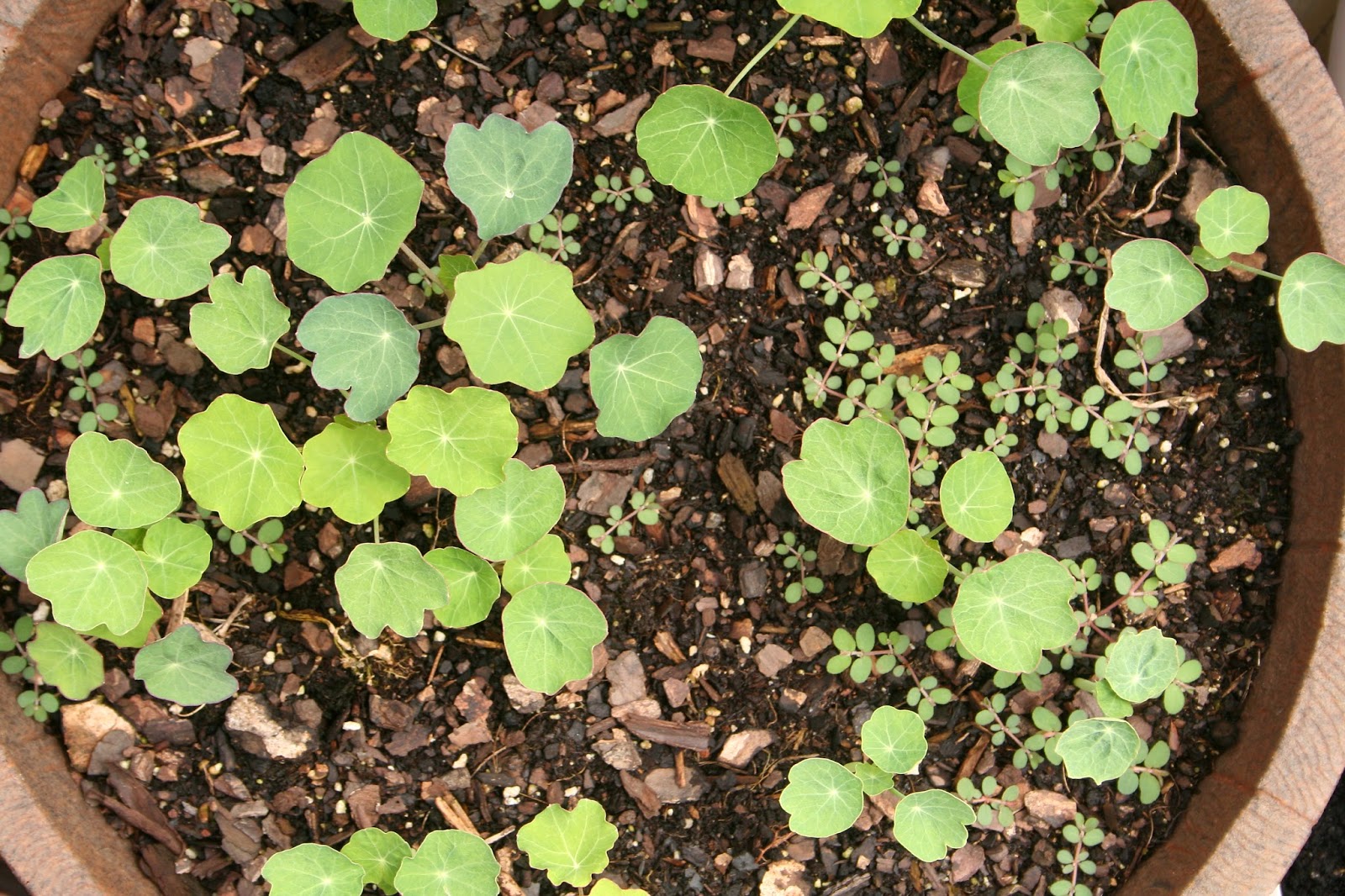 my nasturtiums are not thriving.  sniff, sniff.  i need to figure out what they need.  i want them to be thick and lovely the way they were last year.  they are such a gorgeous flower. 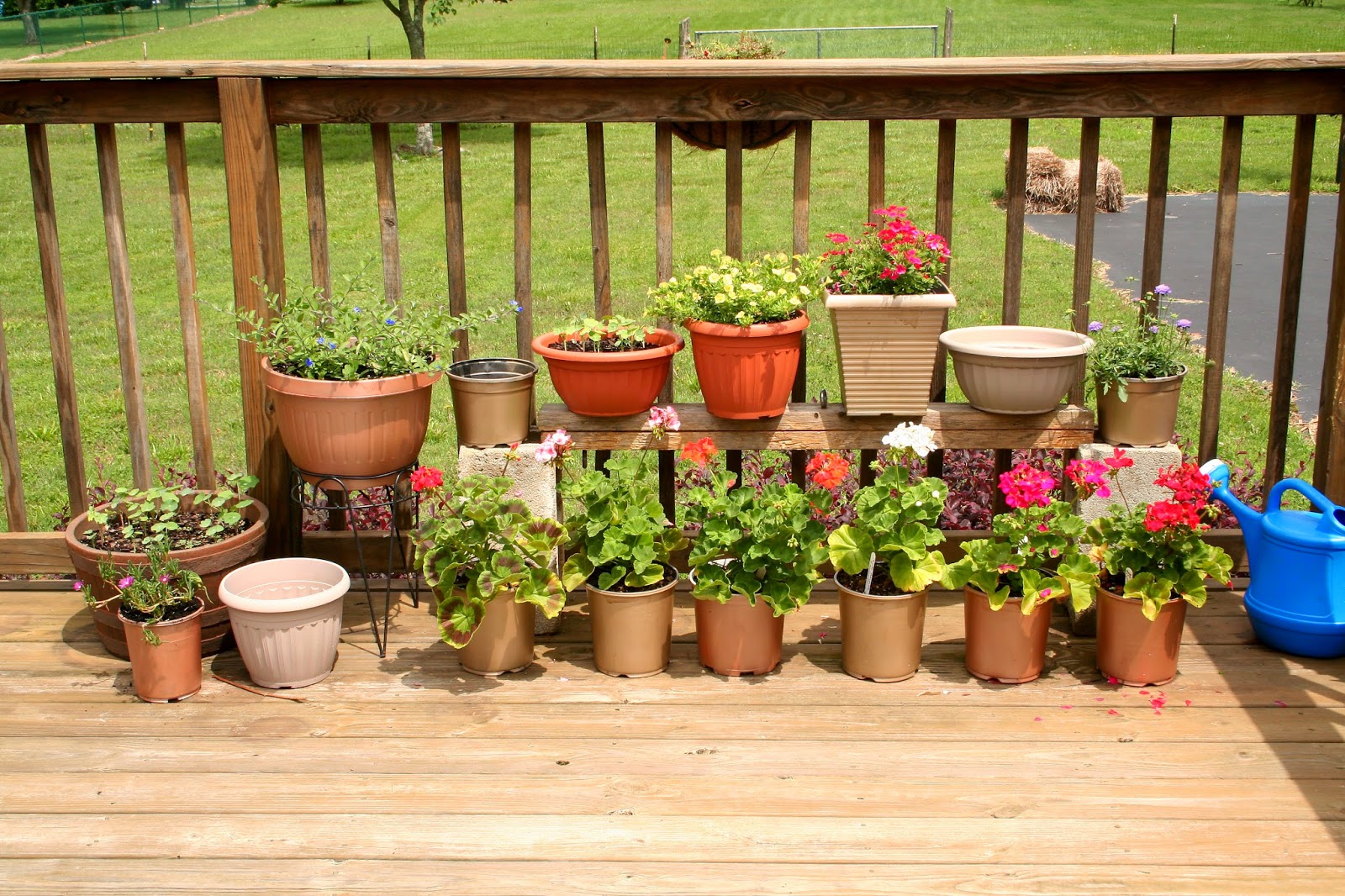 here is my little deck flower collection.  it's coming along nicely.  the row of geraniums were from the high school plant sale.  i bought those at full price, but their prices were much lower than retail stores.  the nasturtiums i planted from seed, and then everything else i got on 50% clearance at lowe's with the exception of the yellow in the middle top row.  i got that one at home depot on my first foray into spring planting when i was badly needing a flower fix.  incidentally, home depot doesn't really do clearances the way lowe's does.  they just ship the dead and dying plants back to the nurseries they came from for full credit.  i don't really understand how that is profitable for the nurseries, but whatever.  i do most of my shopping at lowes.  they seem to have a better selection anyway. 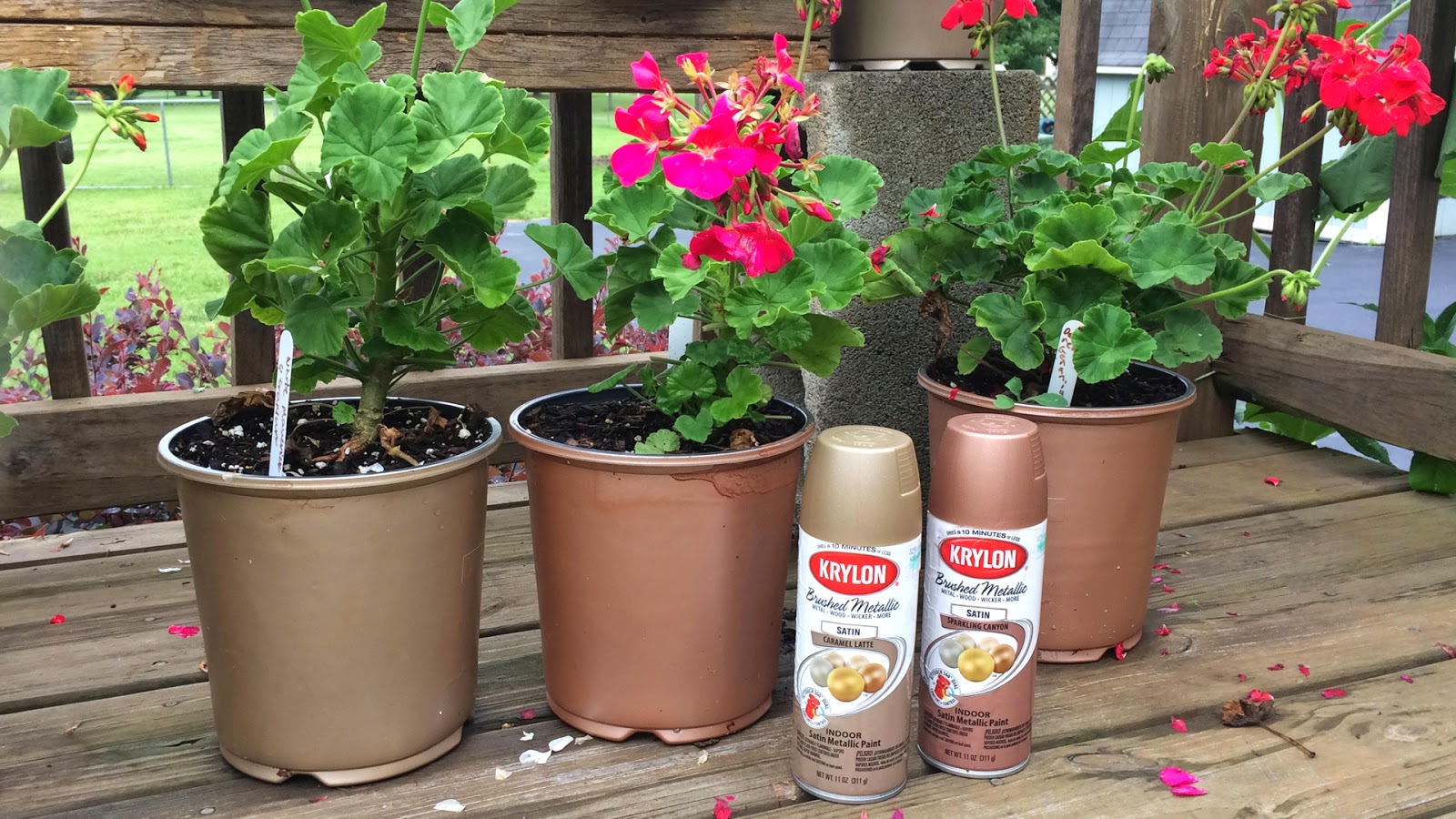 i am also super cheap about my pots.  i hate to buy pots and especially hate to buy pots at full price.  i squirrel away all the cheap thin plastic pots that the plants come in, thinking i'll reuse them.  i did use quite a few this year.  several were white pots with text all over them and the rest were solid black.  i simply spray painted them a soft gold and copper and they fit in nicely with the rest of my faux terra cotta and wood containers.  the paint is krylon caramel latte (lighter) and sparkling canyon (darker).  i paid about $5.50 per can (on sale from $7.00).  so far, I've painted 12 pots and still have a bit of paint left for a few more.  besides the recycled pots, i also painted a couple pots that i got on clearance at the dollar store last fall.  one was bright blue and i tend to favor neutral pots so as not to detract from my flowers. 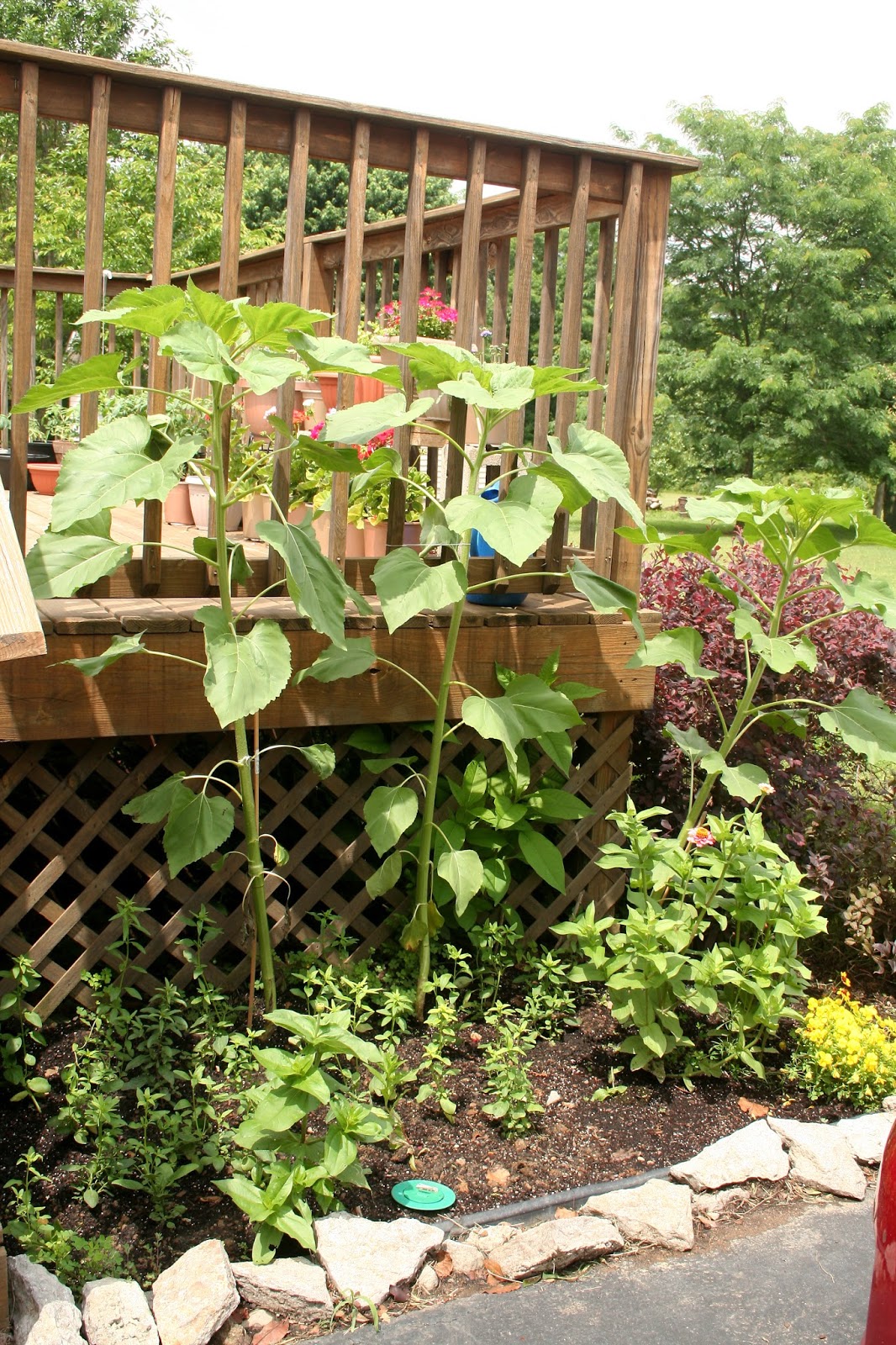 the hillbilly garden is coming right along!  in the back are three sunflowers that g and his little friends planted in a plastic cup way back in march.  so neat to see something so big come from something so tiny.  I've also got the pansy batch leftover from last fall, some zinnias that have reseeded themselves from last summer, and a half a flat of snapdragons that i got on clearance at the high school. 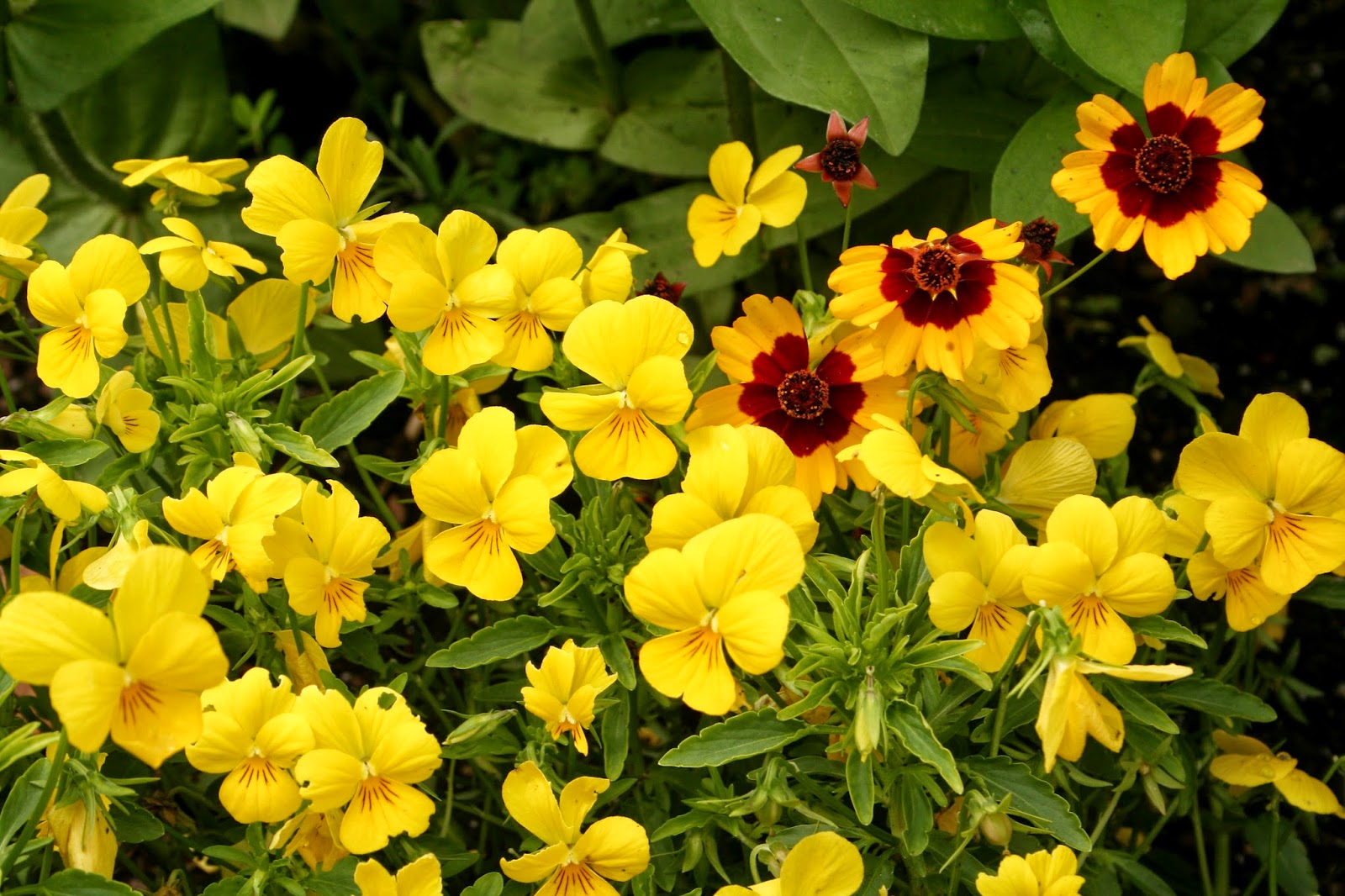 here is a close-up of the little pansies (more like johnny jump ups) and another wildflower that came back from seed. 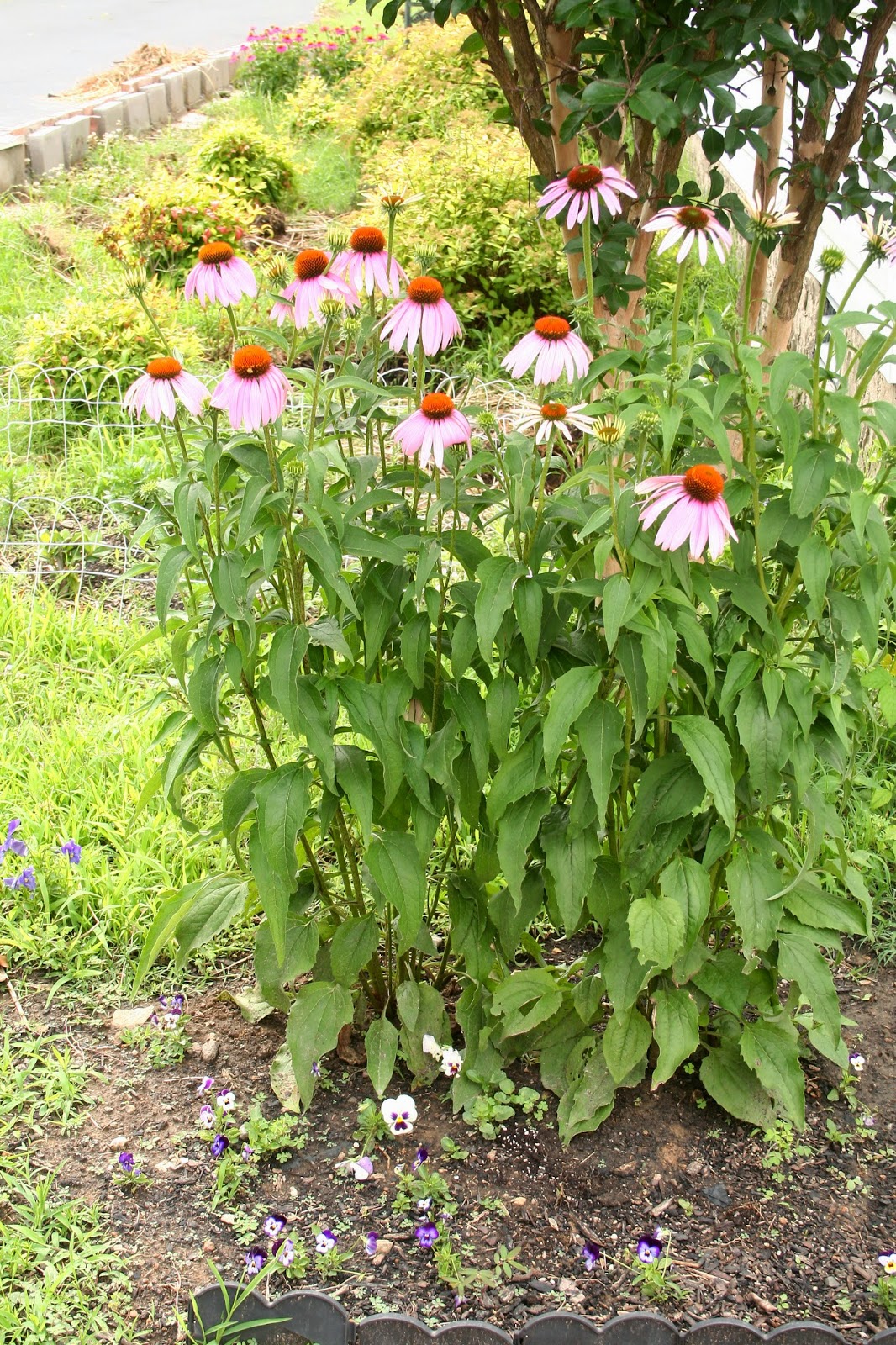 my puple coneflowers came back!  i LOVE them.  i planted three from seed last year and they really didn't do much of anything.  they really only grew two rows of leaves and didn't get much past ankle high.  then this year.  wow!  i'm wondering if they need two years to reach maturity?  originally, there were three, but g's dad pulled one thinking they were weeds.  luckily, g was there and stopped him from killing the rest.  whew!  you also see a scattering of wild pansies.  pansies don't grow well in southern summers, but i'm trying to nurture these along with lots of water in hopes that they will take off this fall.  it's an experiment, so we shall see. 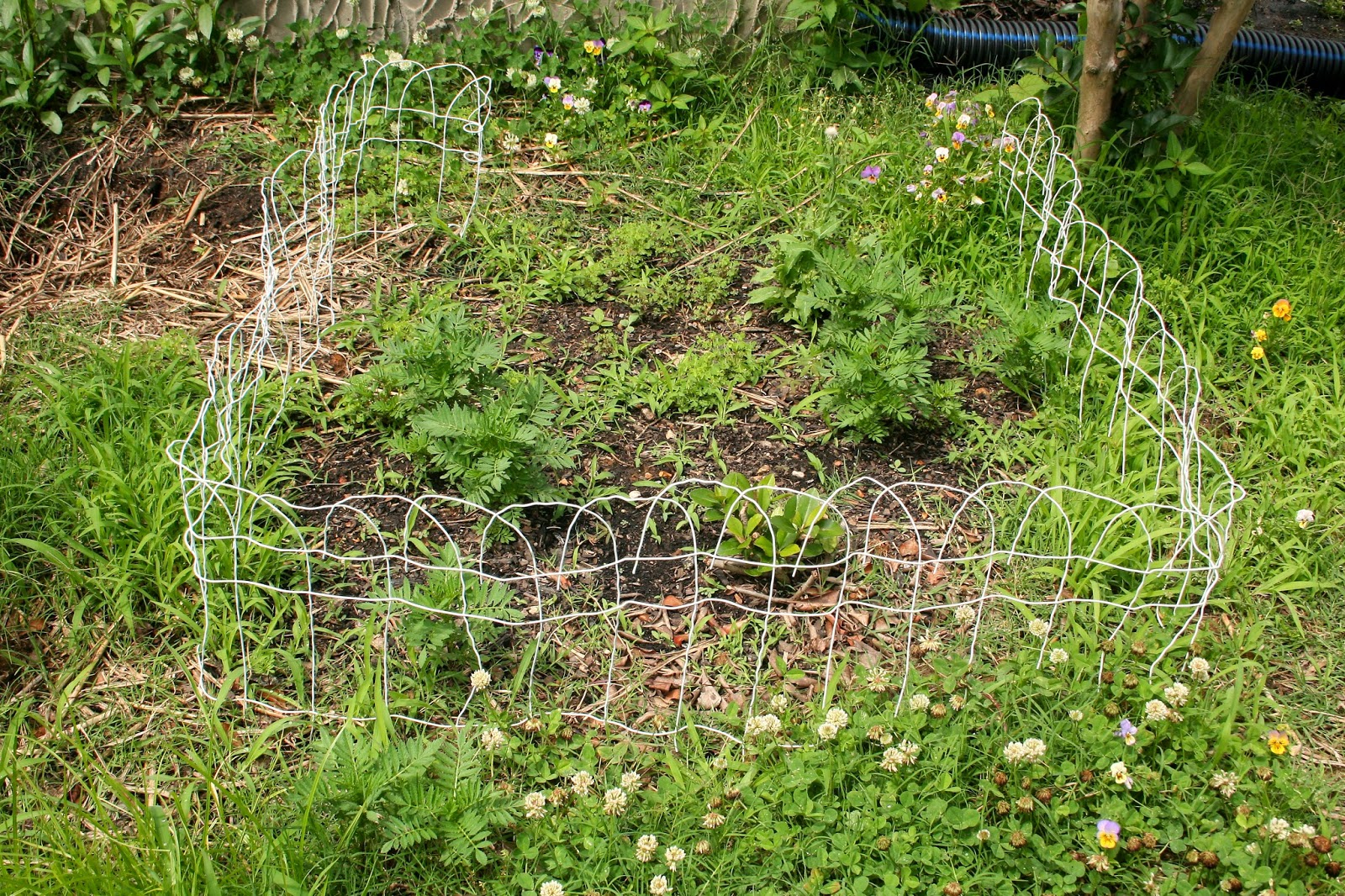 i also found several marigolds that reseeded themselves.  they're growing in the middle of the weed patch, so i put a fence around them to keep them from getting stepped on until i can move them to a safer location.  there's also the prairie hawthorne bush that my sister gave me for my birthday last year.  i was worried that it was dead.  it was nothing but a little brown stub earlier this year.  it came from florida and was only cold tolerant to 20 degrees.  we had an exceptionally harsh winter and it got in the single digits, approaching zero, on several occasions.  i was shocked to walk by and see the little leaves on it again.  go little plant go! 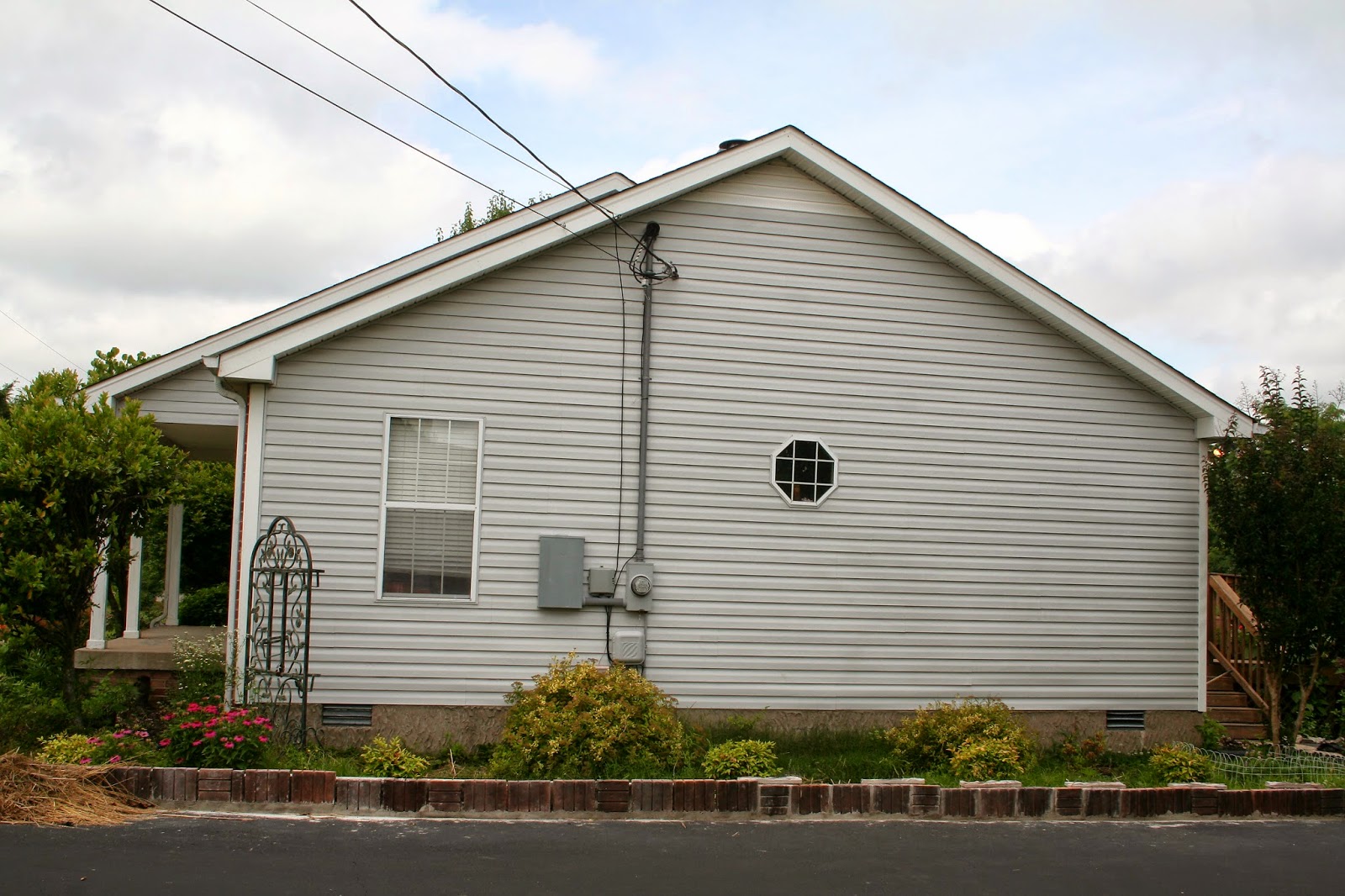 now this probably doesn't look like much to you, but i'm quite impressed.  a lot of work went into making it look so empty.  all the pampass grass and monkey grass is GONE!  plus the neighbor took the bushes with yellow foliage.  all that is left are the fireball nandina that i want to move to the front and a few other random things that will have to be lifted out temporarily when i have dirt filled in.  i swear, i need to buy stock in dirt. 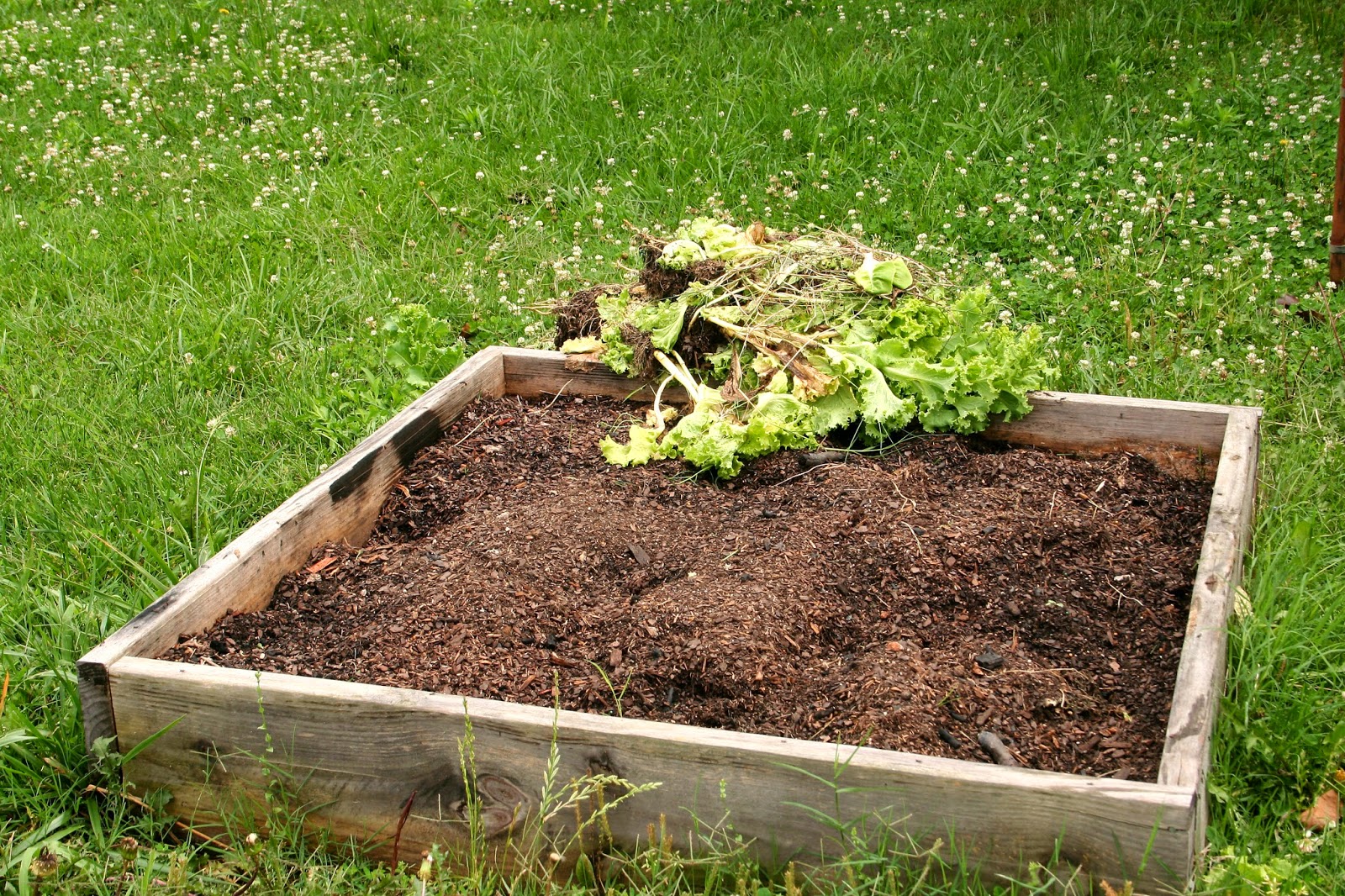 we ripped out the lettuce.  it was out of control and going to seed.  need to put something back in this space.  can't let all that good dirt just sit around, lol. 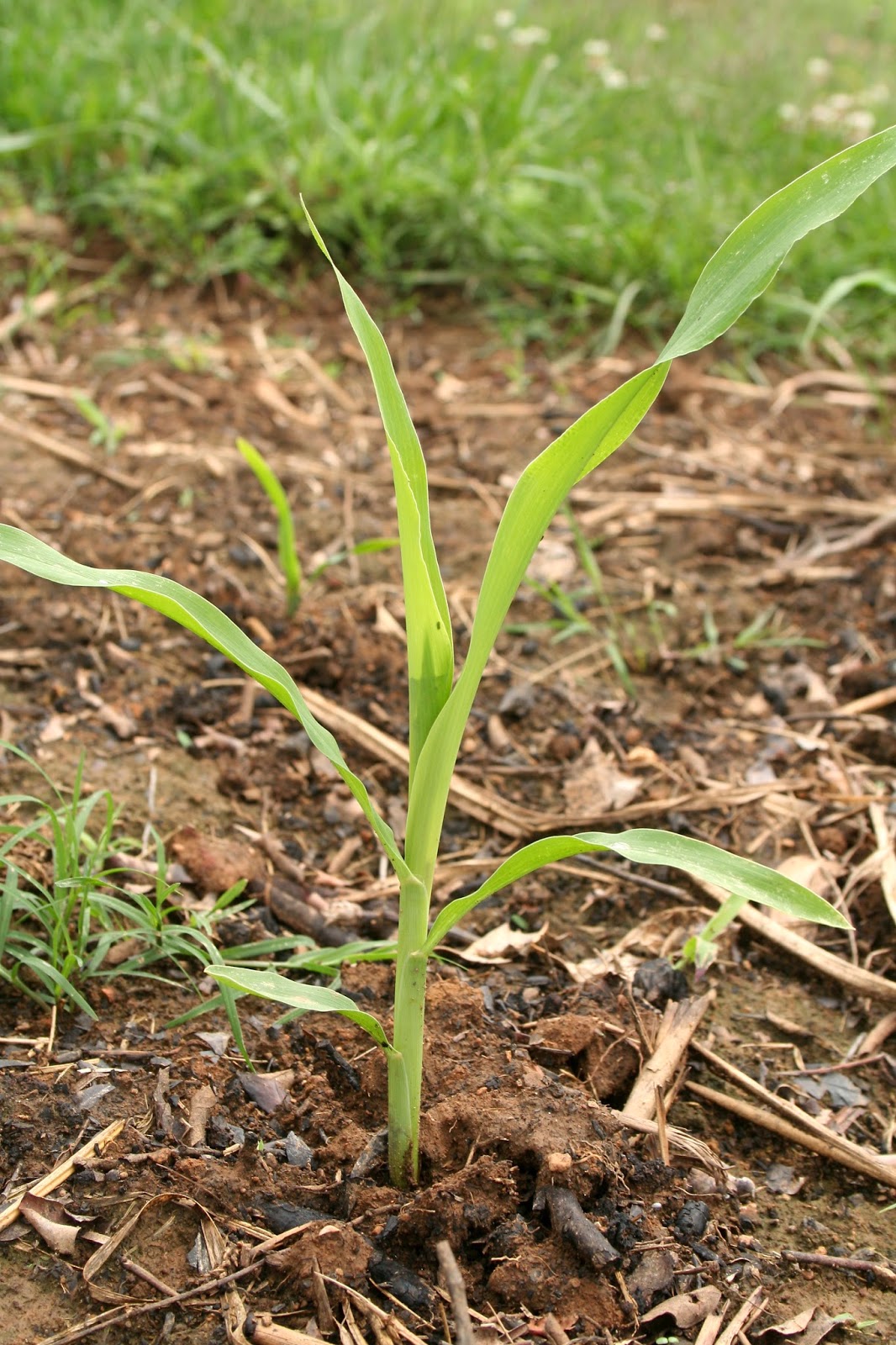 g and his dad got the corn patch cleared and planted. 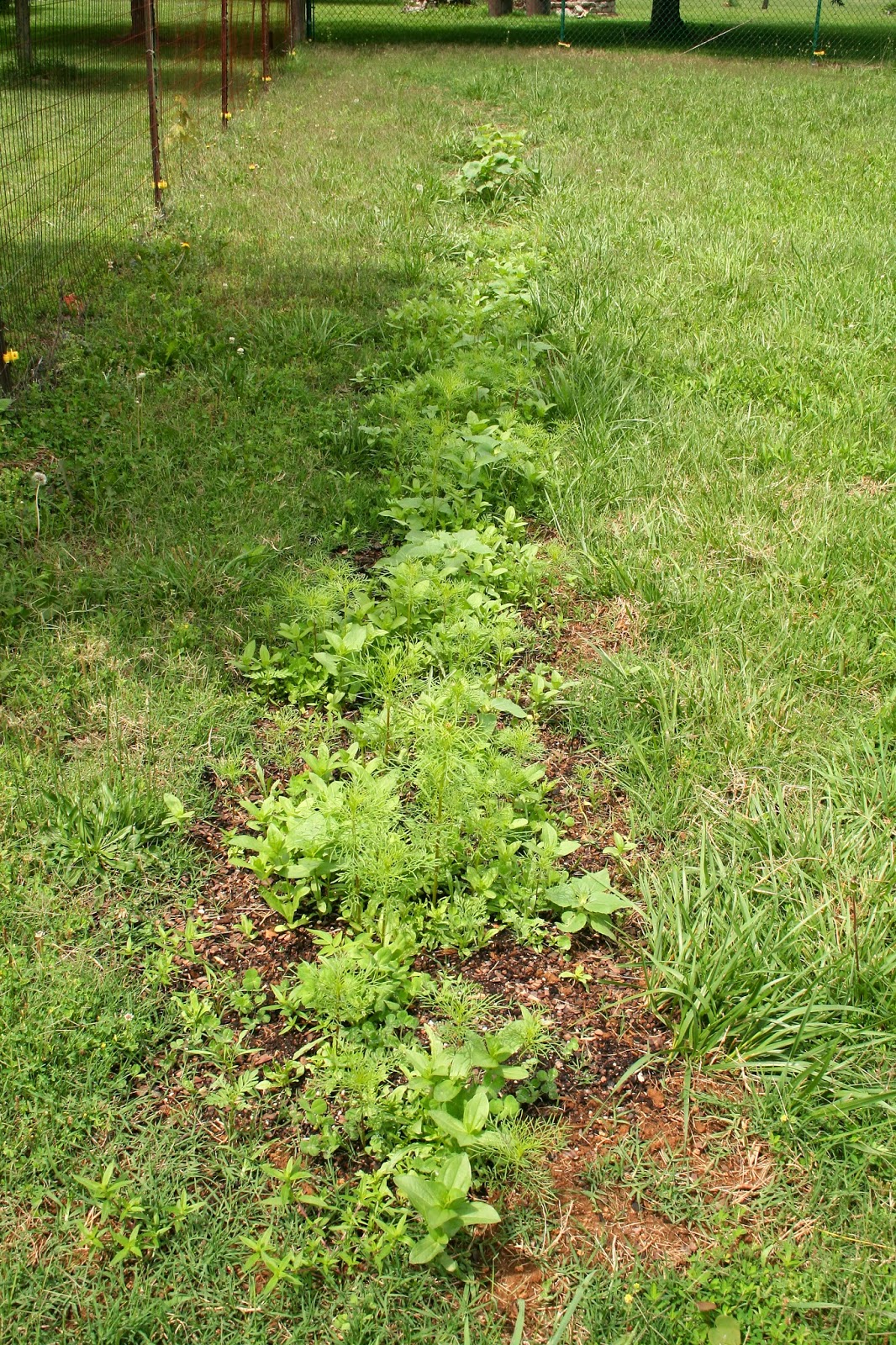 my wildflowers are coming up. 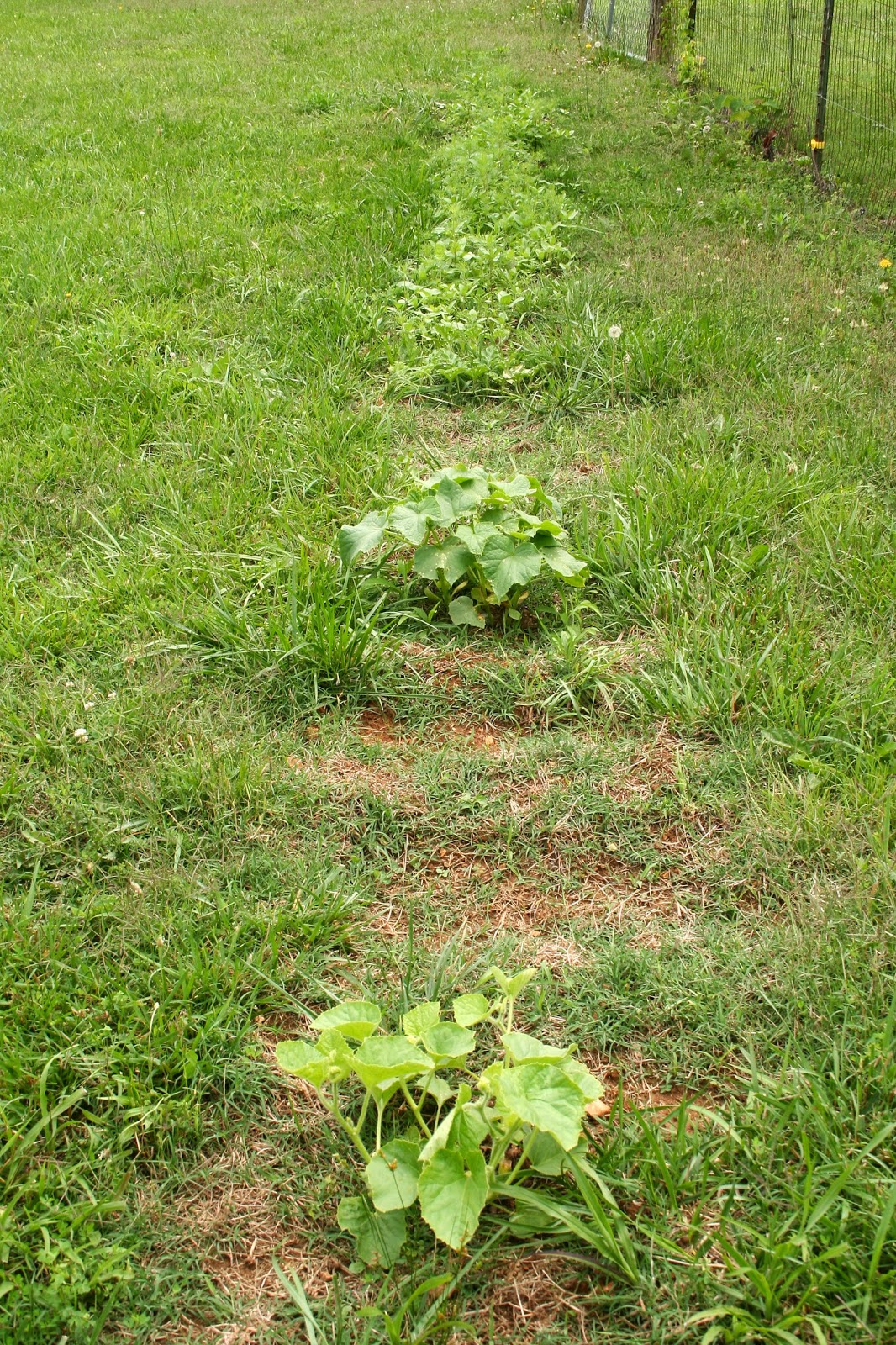 the other side has a bit of honeydew melon, cucumber, and watermelon.  we need some weeding action.  but that's the story in the whole yard.  next year i'll get this patch figured out.  it's growing though. 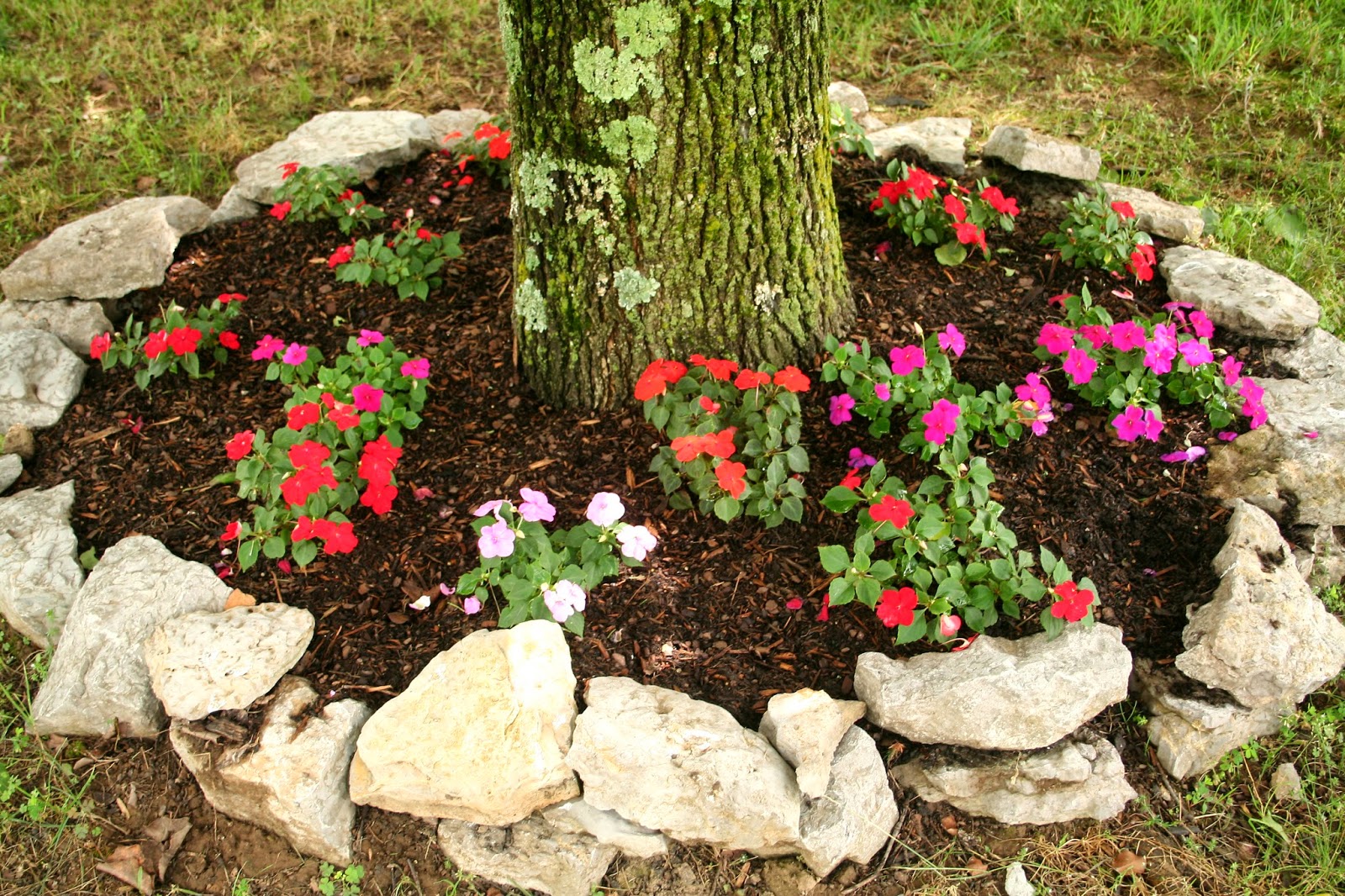 and I've started tidying up the little stone areas beneath the trees.  this is the first one i've gotten to.  i tidied the stone circle, pulled the weeds, added (yet another) bag of dirt, and planted the flowers.  more free flower, by the way.  the county gave us each an impatien for teacher appreciation week.  i then went around asking everyone if he/she was going to take his/hers (hey!  we're not all gardeners here).  i took six home the first day (mine and five donations).  then at the end of the next day, i noticed there were several left wilting in the teachers lounge, so i took a few more home.  happiness.
Posted by doris sander at 4:48 PM