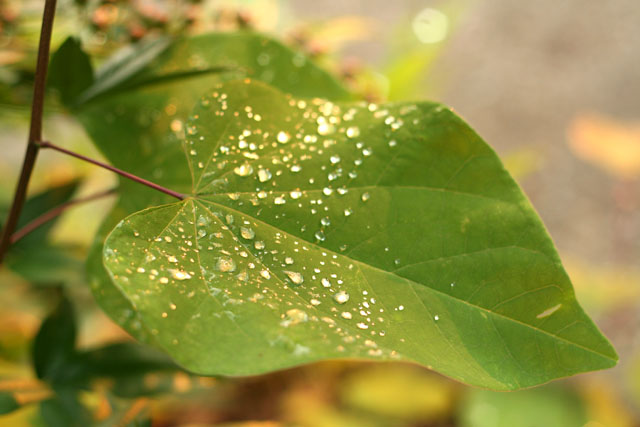 clearly - in an attempt to get caught up on my photo challenge, i took a little walk around the neighborhood with g and my camera one evening earlier this week.  the lighting was golden and we'd had a little shower . . . 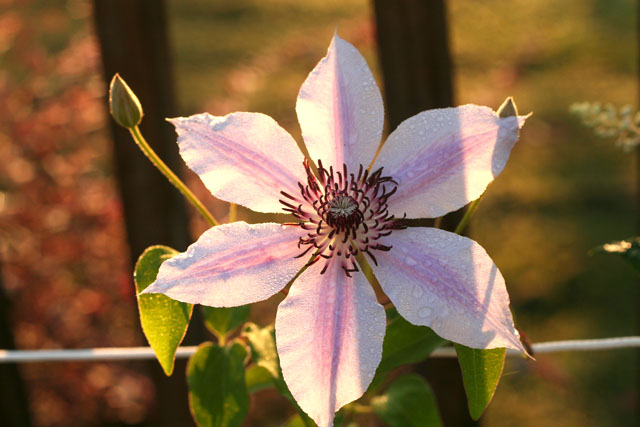 grow - the clematis that i bought on clearance at lowe's for $3.49 has finally grown and blossomed.  gorgeous, no? 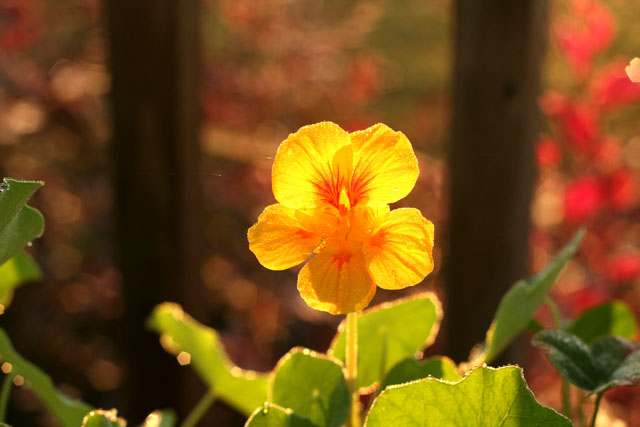 lemon - i am in love with nasturtium and plan to plant more more more next year.  they are a stunning little flower, but hard to photograph for some reason.  this is the best shot i've gotten so far. 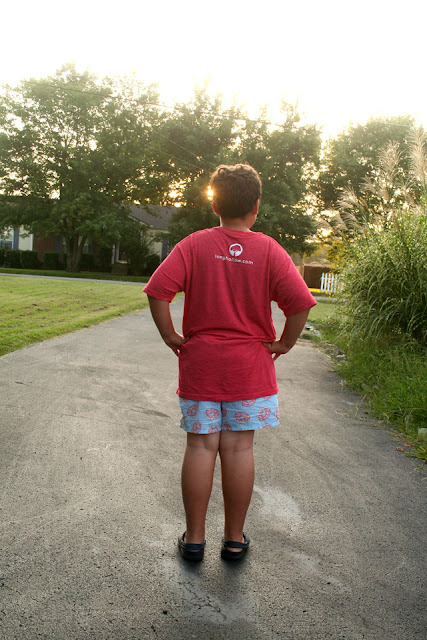 baby got back - g will still pose for photos for me.  he doesn't even seem to think it's off that i ask for a shot of his rear view.  i guess he knows i'm odd.  ha.  these boxers crack me up.  they have donuts with pink icing and sprinkles all over them.  he says that whenever he wears them to school they make him hungry all day.  lol.  and yes, he walks the neighborhood in his boxers.  what can i say. 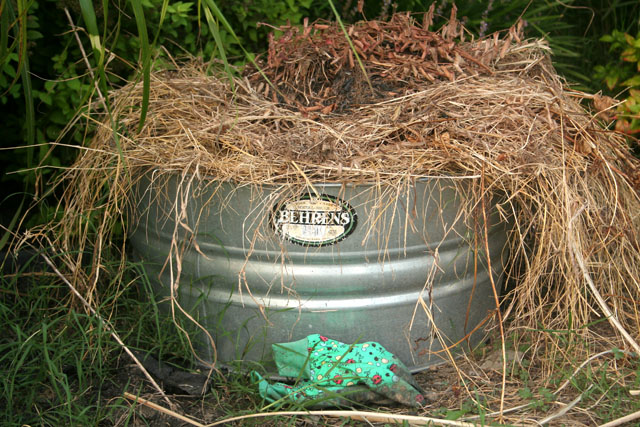 gobbledygook - i am hoping that next spring i will have the rampant weed situation figured out.  sigh. 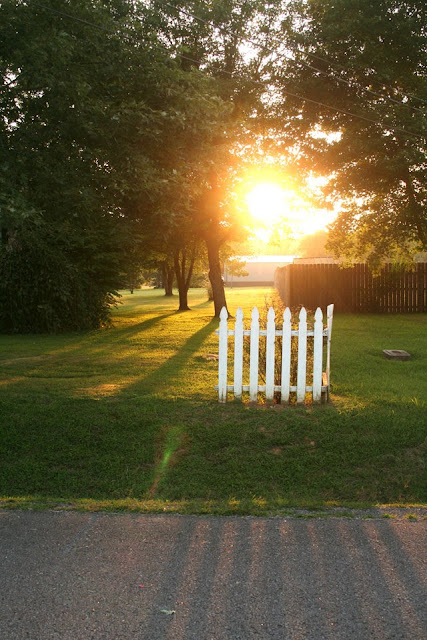 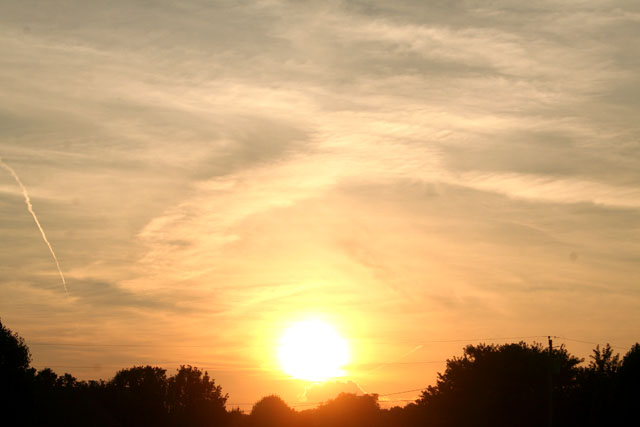 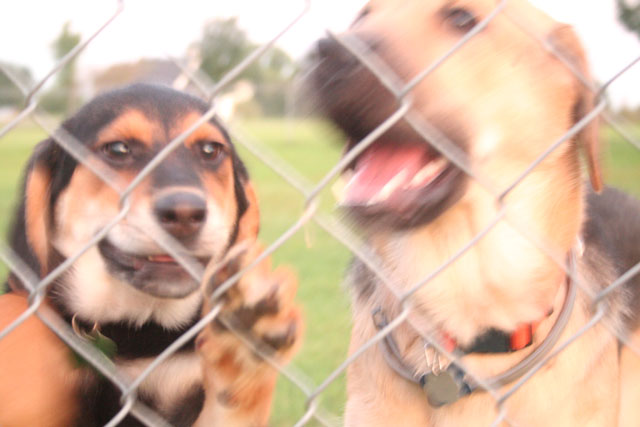 dog days - we finally have new neighbors in the house next door.  they're awesome.  exactly the ones we were hoping for.  these are their children.

and i think i have gotten all 31 of my photos!  not all posted yet though.  i made the executive decision that the challenge ends today for taking the photos, but they can actually be posted at a later date.  it's nice to make up the rules as i go.  so more challenge pics tomorrow!
Posted by doris sander at 9:40 PM 1 comments

Scrapbooking from the Soul: A Giveaway 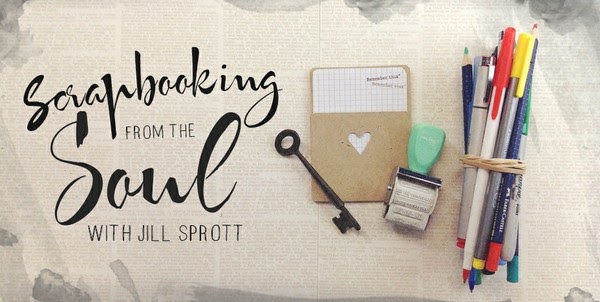 Jill Sprott is the quintessential scrapbooker.  Her designs are flawless, her technique is amazing, and her journaling is always straight from the heart.  I was so honored to contribute to Scrapbooking from the Soul, her very first class at Two Peas in a Bucket.  You won't want to miss out on this one! and I do hope there are many more classes from Jill to come as she is a fabulous teacher.

I'm giving away one spot in this class.  Please leave a comment on this post to be entered to win.  Drawing will be this coming Sunday at 2:00 p.m. CST.  Happy Scrapping! 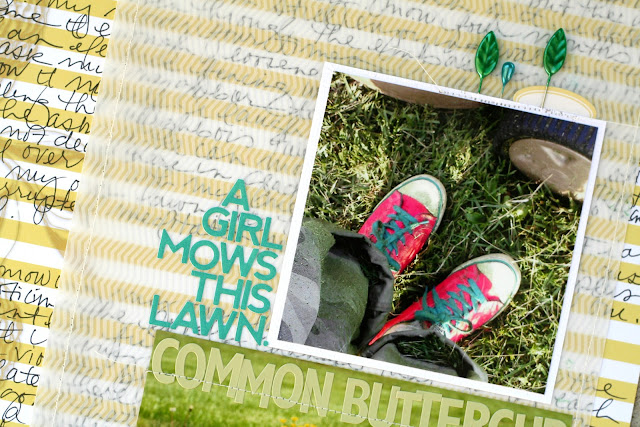 Here is a peek at one of my contributions (above) and several of Jill's (below). 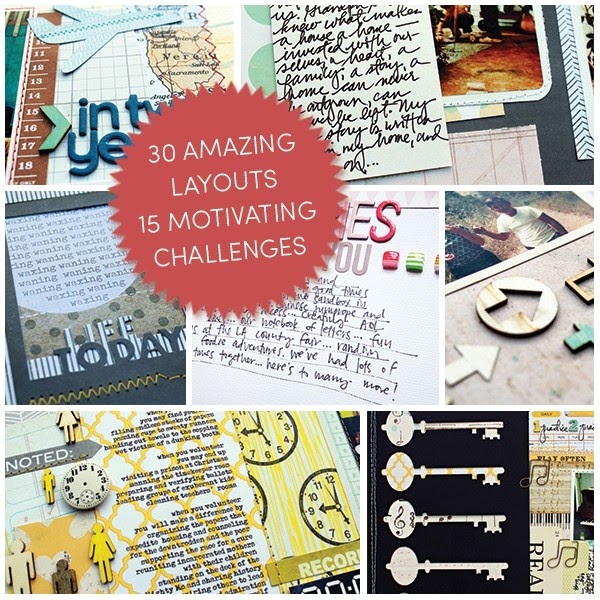 get it scrapped!: august photo a day challenge

a few of us over on the get it scrapped! message board have put together a photo a day challenge for august.  the theme is quirky and so far it's a lot of fun.  there has been much "cheating" though as the photo a day part has pretty much turned into more of a scavenger hunt to take pics to go with the categories willy nilly as you will.  i'm in!  this is my first batch.  i'm slightly behind, but i'm hoping to visit a friend's new house and go to the fair this week, so photo ops should abound. 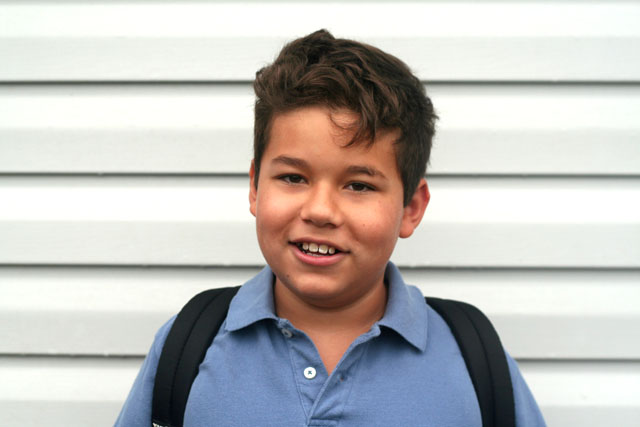 august -  the first day of school was august first.  i know some of you are just starting and can't believe we've already got over two weeks under our belts here in the south.  i've managed to take a pic of g on the first day of school every year so far.  i love this one as i've obviously caught him mid speal.  my boy has a lot to say . . . 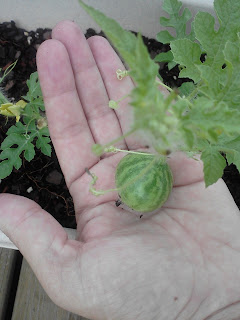 water works - we have a teeny watermelon!  how cute is it?  squeal!  the plant that cousin avery gave us is producing!  it's actually tripled in size since i took this photo. 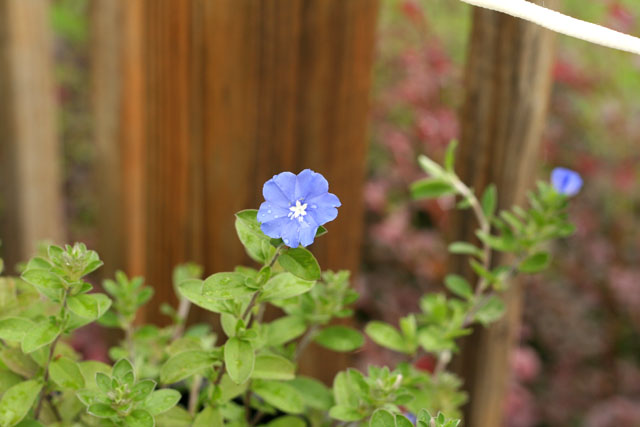 blue skies smiling at me - we've had a lot of overcast days here in tennessee.  i'm not complaining and neither are the flowers.  i picked up this one in the clearance section at lowe's earlier this summer and it has bloomed it's little heart out for me.  it's still going strong and the foliage stays so beautiful with minimal care.  the common name is "blue daze."  i'll definitely be looking for more next year. 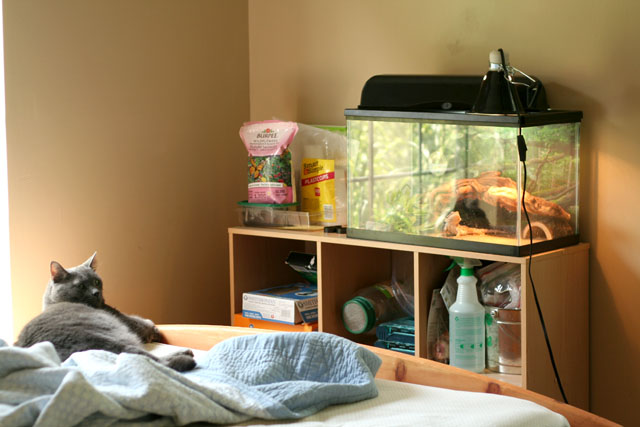 cat nap - we dragon sat for a friend when he had to go out of town for his grandmother's funeral.  pepito enjoyed watching fred hanging out. 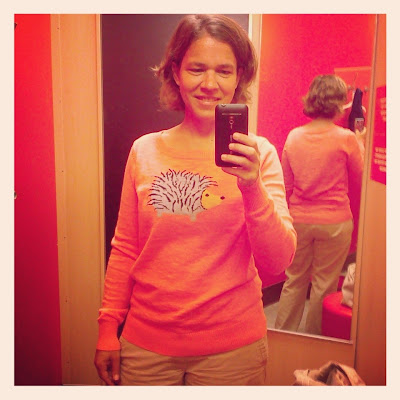 new - now i'm typically not in the habit of taking selfies of myself in the dressing room.  i took this one as a joke for a friend.  i kept raving about this sweater and she couldn't believe i'd actually buy it.  here's the proof carrie!  i love this sweater.  it's florescent peach with this happy little hedgehog on the front.  i think it perfectly suits my personality: warm and vibrant, but a little prickly if you get to close.  or maybe that describes women in general? 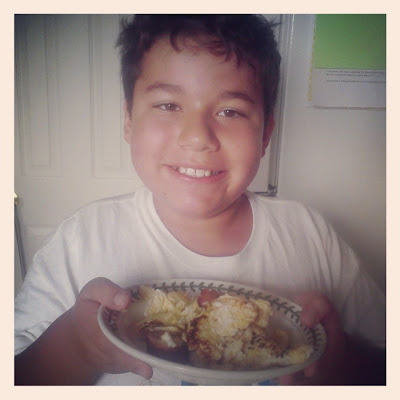 a full plate - g made breakfast for me.  scrambled eggs and smoked sausage.  yum. 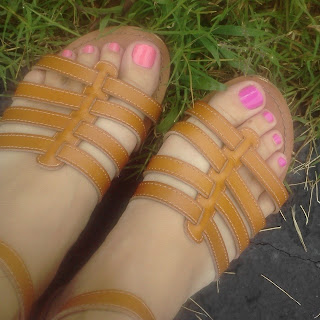 if the shoes fits - my favorite new sandals from the gap that i had to e6000 the soles after just one wear.  they're good now.  whew.  toenails colors are razz berry and peach beach by sally hanson xtreme.  it's my favorite new combo. 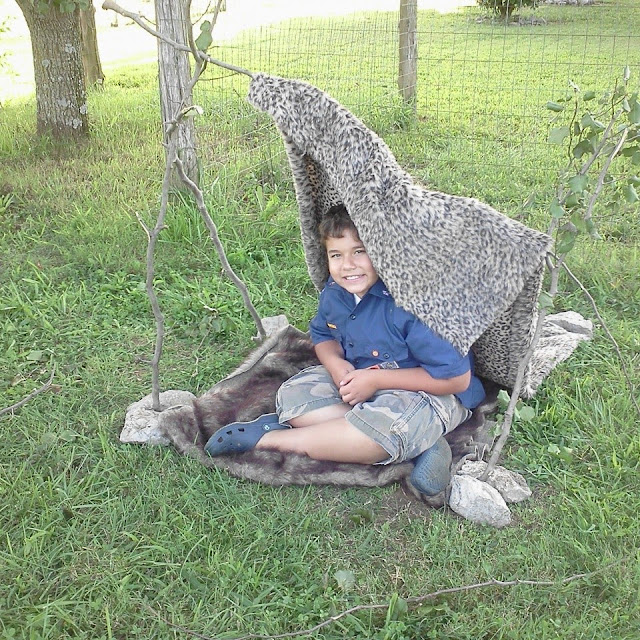 architecture - i was totally delighted that we finally have new neighbors in the house next door and it's an awesome young couple.  g was totally delighted that the guy is a landscaper and trimmed the branches on his bradford pear the first day he moved in.  g has been hauling those limbs over to our house ever since.  his first project was this lean to.  then he made a bow and arrow.  next up is a teepee. 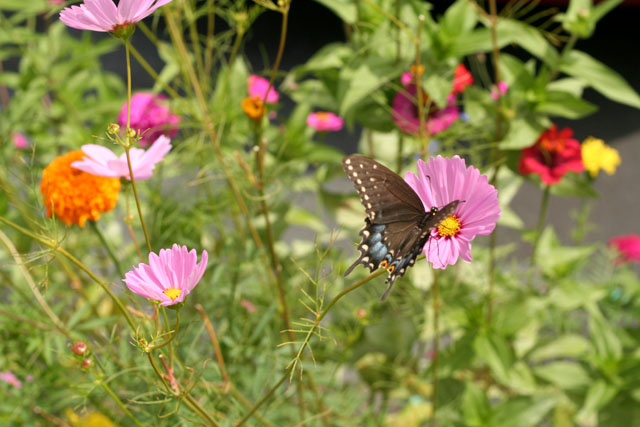 you're my favorite - i sowed some wildflower seeds right in front of my parking space at the beginning of the summer.  they have grown and blossomed into a spectacular sight.  the butterflies and bees have loved them and they make me so happy every afternoon when i drive up after school. 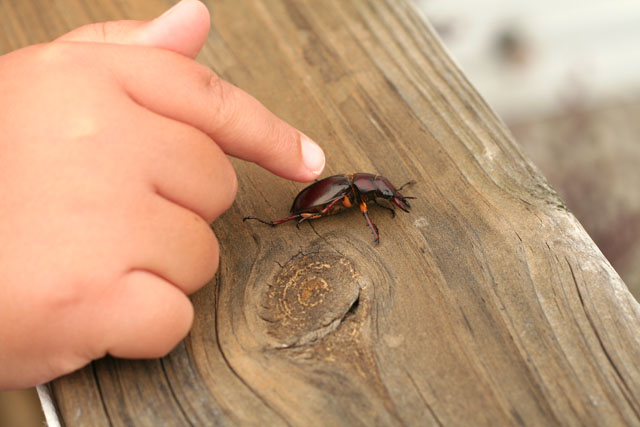 don't bug me - we found this ugly bug on it's last legs right outside our door one day.  we think chichi caught it, played with it for a while, then left it as a gift for us.  thanks kitty. 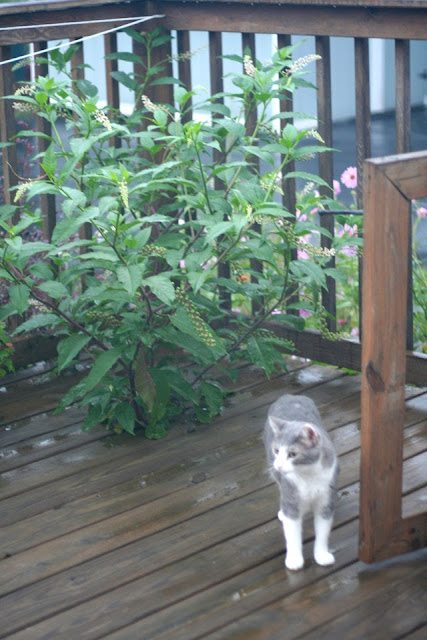 bloom where you are planted - this plant grew up from under our deck.  i kinda liked the foliage, so i let it grow.  then it started blooming and the delicate blossoms were very pretty.  one of our friends says it's "poke salad."  apparently you can cook the leaves like turnip greens.  no thanks!  below is a clearer pic.  it had just rained when i took these, so my camera lens was fogged up in the first one. 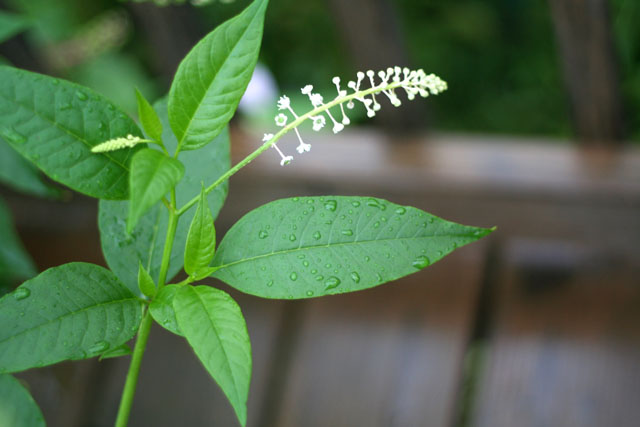 come join us if you're looking for some fun photo motivation this month!  i'm hoping to post more challenge pics this weekend.  :)
Posted by doris sander at 8:39 PM 8 comments