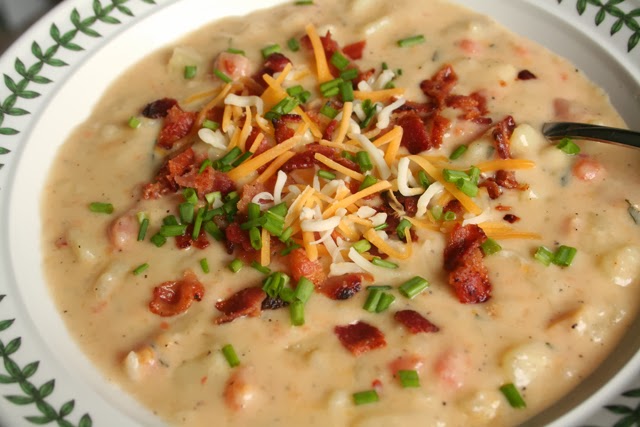 hooray!  i finally made the potato soup!  i think my problem has been that the recipes i happened to pin on pinterest were just too darn fancy (intimidating) for me.  i like simple.  i finally just went the old-fashioned route and googled a recipe.  walah!  cheesy potato soup.  i pretty much followed the recipe.  ok, i probably added a little more butter and salt, there was no FOUR cheese shredded cheese to be found at kroger, and i forgot to buy steak seasoning so used parsley flakes and crushed red pepper instead.  oh!  and i used quite a few more carrot than the recipe called for.  i figured i should add some healthy since i added more unhealthy (hello salt and butter).  i also garnished with bacon and scallions.  the scallions, though pretty, were not really necessary.  the bacon was necessary.  oh! oh! and i mashed the potatoes a few times to thicken it more.  yea.  i pretty much can't leave a recipe alone.  at least it turned out well this time!  i can't say the same for my kitchen, however.  i scorched the heck out of the potatoes and ended up throwing that pot away, dropped the lid to the cast iron skillet on the floor shattering it, and had to cut the the mayo bottle in half to get to the dregs so i'd have enough for the deviled eggs.  but that's' another story.