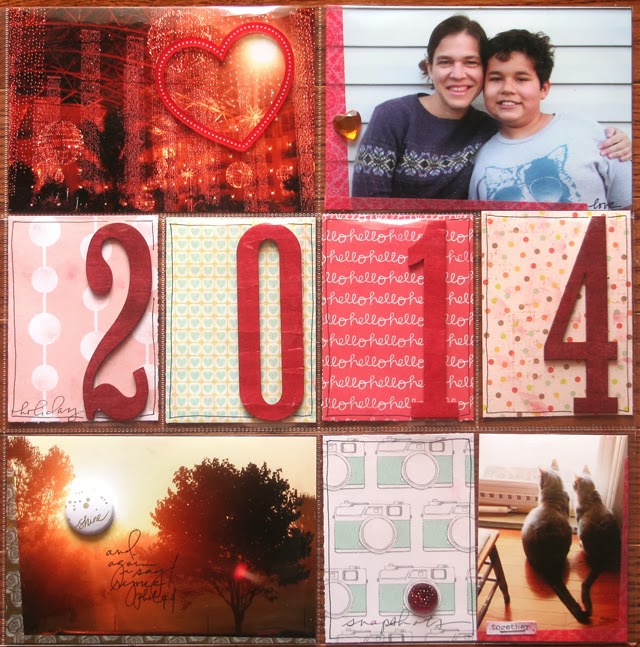 i was led into project life last year kicking and screaming (in my own mind, at least).  and this after poking fun at the whole process for several years prior.  i had always been a "moments" scrapbooker, so the thought of project life simply did not appeal.  not to mention it also sounded incredibly overwhelming.  i am here to report that i was wrong on both counts.  project life is easy.  it's a joy and a complete treasure.  i am thrilled to bits to launch into a new year of recording our memories in this format.  here are a few things i've discovered in my first year . . . 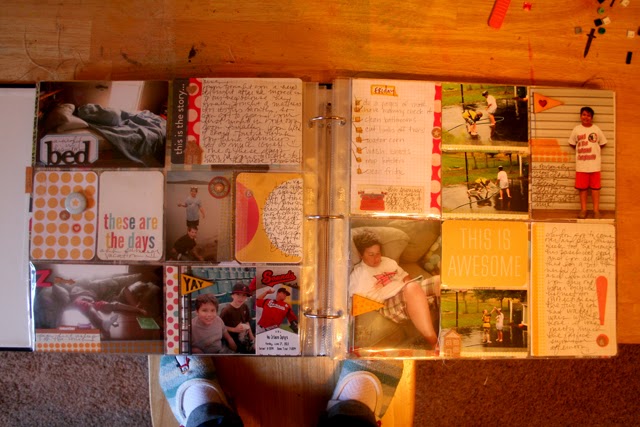 i do not work in a week by week format.  what works for me is to print and slot my photos every two weeks or so.  i simply go through my cell phone pics and make a list of the ones i want to include.  i then go through my camera pics and fill in those where they fit chronologically in the list.  from there i make little pencil sketches of the pocket pages i'm using and fill in where the photos will work best and try to remember to leave pockets empty for pretties (i'm notorious for going heavy on the photos!).  when i get to the end of a month, i reserve a pocket to use as a marker denoting a new month starting.  that's it.  and then i go back to my old ways of NOT scrapbooking chronologically.  that's right.  i flip through my pages and scrap where the notion strikes.  for example, this spread is from june and i just finished it last week.  it was the last holdout in the first two albums.  i have two albums completely finished.  JANUARY THROUGH AUGUST OF 2013 IS COMPLETELY RECORDED.  i can hardly believe it.  it's so awesome.  gabriel enjoys it tremendously.  it's fabulous.  and am i stressed about september through december not being done?  NOT AT ALL!  i mean, gosh.  what am i going to do when he goes off to college?  i'll need something to keep me busy!  i will say that i have my photos printed and slotted all the way through december 12th.  and the rest of december is edited and awaiting printing (i'm just low on ink, so soon.  very soon).  so basically all of 2014 is available to look at and enjoy.  this is way more than can be said for any other year.  i say i am more "caught up" than ever before in my scrapping history.  wowzas!  (btw, sorry for the less than stellar photos.  i've been trying to do better with that, but i was experimenting photographing in my craft room.  it didn't go as well as i had hoped.  i left my feet in the photo as they amused me and i thought they might amuse you too.  i did go back and redo the 2014 intro page at the top this morning, but was too lazy to do the rest.  ;). 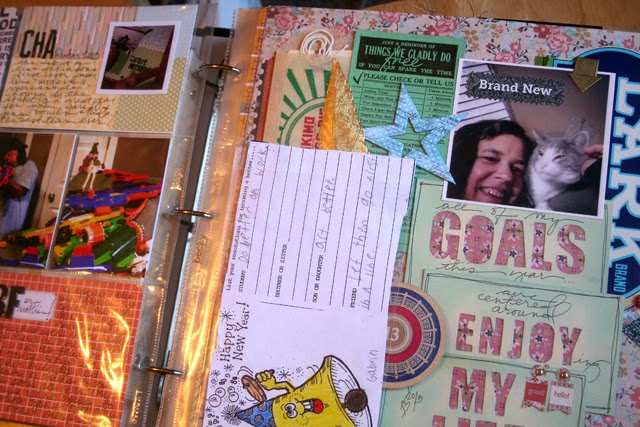 here is another shocker.  PROJECT LIFE HAS TOTALLY REJUVENATED MY URGE TO CREATE LAYOUTS.  i bet you didn't see that one coming.  it's true though.  in july (i can't even remember what prompted it) i decided to mix my layouts in with my project life spreads.  it was a lightbulb moment.  it's truly a perfect union for me.  project life provides the timeline (it has a fun, fast-paced comic book feel that my son loves) for the "moment" layouts that i love. 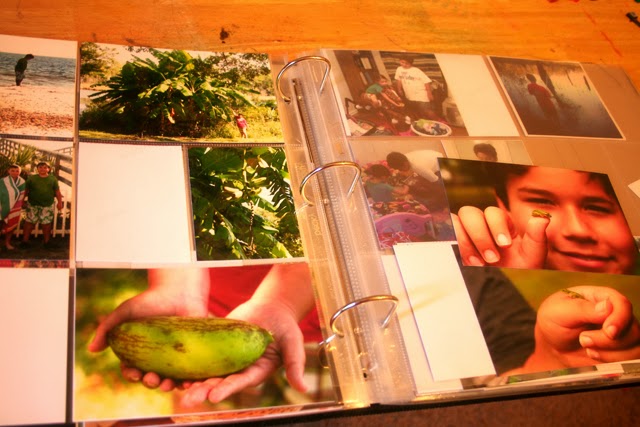 since i began mixing the two after the fact, there is some duplication with layouts and project life pockets during the first six months of the year.  that's okay.  life is an evolution, right?  ever since my lightbulb moment, i've been making layout choices at the same time that i'm printing and slotting my project life photos.  whenever i come to a set of photos with more than i'd want to include in the project life pockets, or with larger stories or deeper thoughts that i want to share, well, i decide to make a layout.  i add in a 12x12 page protector and throw the pictures in there till i'm ready to scrapbook them.  the only hang up is that i need two layout ideas close together in time, so my pockets will be evenly filled.  this is no big deal at all.  i can always think of something else to say.  another perk of this is that i don't have to edit and print pics when i'm ready to scrapbook.  i just flip through my albums and find a page i want to work on.  i love it! 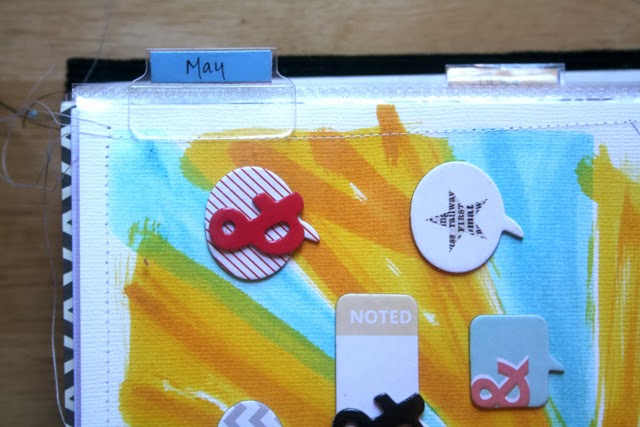 i've begun adding tabs to the pages, so it's easier to find the months.  a nice touch i think.  next i need to figure out something that works on the spine for easy identification. 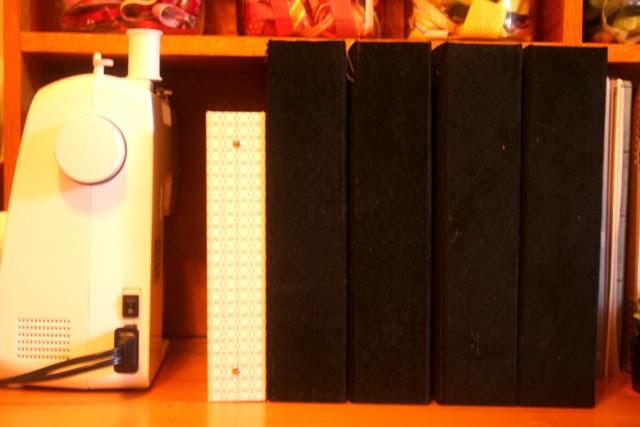 i ended up with three albums for 2013 once i merged the layouts with project life.  at one point i really stressed about having too many albums for g to handle when he's an adult.  then i realized it just doesn't matter.  i love creating them and i love flipping through them.  it's all good.  the fourth album is one i've started for 2012.  is she crazy?  no!  it's fun, i tell you!  i've already gotten october and november done in that one and have the pictures printed and slotted for december.  rock on!

my plan from here is more of the same.  the two finished albums will move to the living room for g and his little friends to enjoy.  i will continue plugging along at 2013 and 2012 as i begin 2014.  i definitely need to buy some more albums.  at some point i'd like to analyze previous years.  but like i said, when g goes to college i'll have way too much time on my hands and will be ever so thankful for scrappy endeavors to keep me busy.  :)