get it scrapped!: life ain't fair, but we made lemonade! 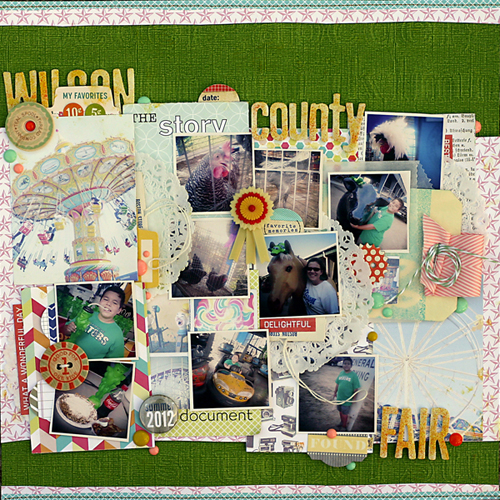 how was your weekend?  mine started off fabulously as dear chelle came over and scrapbooked with me.  i wish she would come over more often as i am a social scrapper.  g would have preferred a playdate as well, but he very graciously settled for the purchase of the much requested minecraft for the computer.  turns out it was a good thing none of his little friends could come over friday as saturday morning around the 11 o'clock hour he fell victim to violent explosions of epic proportions from polar ends.  yes, sickness has been running rampant in our school system.  there was much cleaning and disinfecting of the floor and throne and i had to cancel my plans to see les mis.  les sigh.  and then g cried as we had to cancel his saturday playdate as well.  le sniff.  but then we made the best of it and played minecraft and scrappies in the craft room all afternoon and had homemade chicken noodle soup for dinner.

i was really thinking (hoping) it was a 24 hour bug as he felt fine all day other than the squirt factor.  but alas. at 3:00 am i awoke to the burp and lip smack that signals imminent disaster.  tuck and roll as 2 seconds later the eruption comes forth.  he's usually better about sitting up and spewing on the bedspread.  this time he just lay there and gushed.  straight through the sheets to the mattress below.  oyve.  get him in the shower, mop up the wettest part, sprinkle kitty litter deodorizer on the rest, drag the mattress from the room, blow up the air mattress, dirty sheets in the washer, new sheets on the bed, another notch on my mommy of the year bedpost.

i actually awoke again later that morning in a crazy awesome cleaning/organizing frenzy.  i got that mattress freshened, the shed cleared out and reorganized, the linen and utility closets under control, all the empty cardboard on the place broken down and ready for recycling, the kitchen and bathrooms cleaned, the rest of the pansies planted (i started that project back the first of november), and umpteen loads of laundry washed and folded (we don't believe in putting it away around here).  g's dad came over and made dinner and lemonade and i went to my happy place and began purging the scrappies.  wheee.

today g woke up healthy and hale.  we piddled for a bit then went to miss jenni's for a bit then picked up a couple friends for a playdate at our place (THANK GOODNESS!).  there has been much nerf gunning, hide and seeking, lego-ing, and general happiness.  now we are doing fraction homework (on a 3 day weekend, so not fair) and reheating the chicken noodle soup.  one more day sure would be nice, but there's no snowbird in sight.  ah well.  it's only a four day work week! 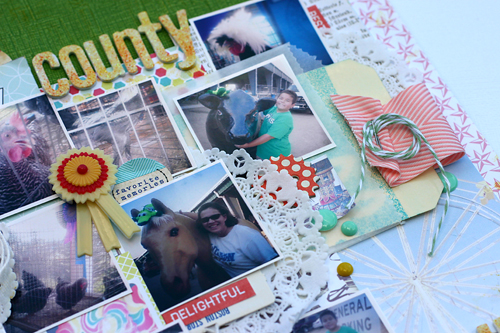 this layout was made for the article "ideas for scrapbook page embellishment clusters" at get it scrapped!  i loved working with these papers by allison kreft and was delighted to see that she has a new release out with webster's pages.  and i promise you the title font looks much cuter irl.  the letters are glittered foam.  i inked them to change the color and i guess the glitter catches the light weird when they're photographed.  ah well. 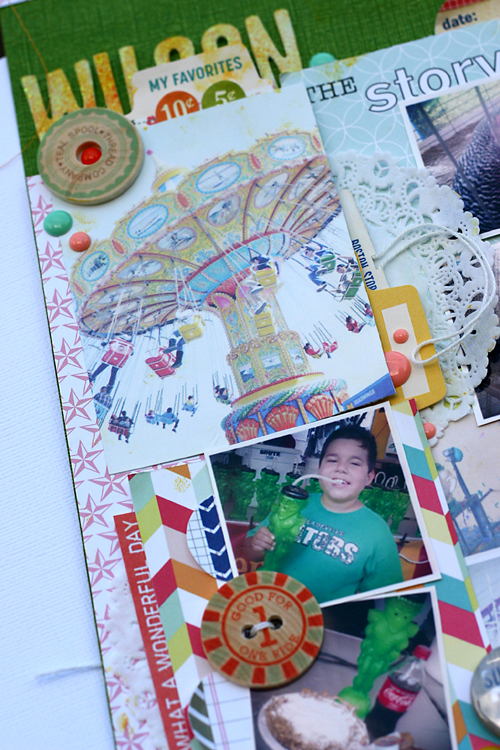