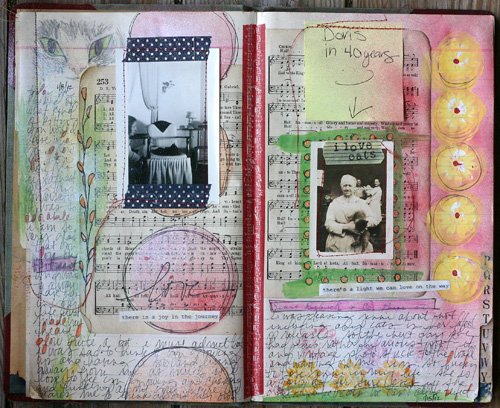 i really didn't intend for this spread to turn into "ode de cat" but there it is.  the journaling on the left is about g watching four episodes of cats 101 on demand and having a serious discussion with me about the merits of the various cat breeds and which he should have when he grows up.  it was really quite sweet.  the alien eyes in the top left came about when i tried to sketch chichi while she was sitting in my lap.  bad idea.  on the right side is a funny story.  have you seen jenni's new line, "magpie?"  i was over there the other day and found an old picture book out that had the dog and a CAT so i was fussing at her for not including any kitties in the new line.  turns out that wasn't the book she got the artwork from, so i had to let her off the hook.  the next day she had the vintage pic on the right with the post-it note taped up on the wall.  so funny.  but i think i like the old photos in the art journal look.  i remember seeing it once in a somerset studio and liking it quite a bit.  need to go through jenni's old photos and buy a few.  maybe they'll inspire me.

i was very uninspired for quite a while on these pages.  i had slapped those music pages down and for some reason that scheme totally threw me off.  i just couldn't think around it for the longest.  then the cat drawing fiasco bogged me down.  nothing happening.  finally, i was checking out robin marie's blog the other day and noticed she was taking a free art journaling course through strathmore.  i signed up and have watched the first two videos in the series.  i gotta tell you.  i have art inhibitions.  yes i do.  but it has given me the urge to play with backgrounds.  i'm anxious to give it a whirl this week.  and between that and the old pics i was able to slog through finally.  i think it turned out rather fun in the end.  hopefully the next page will be easier.

the rest is technical information for anyone interested in what i've done on this one. 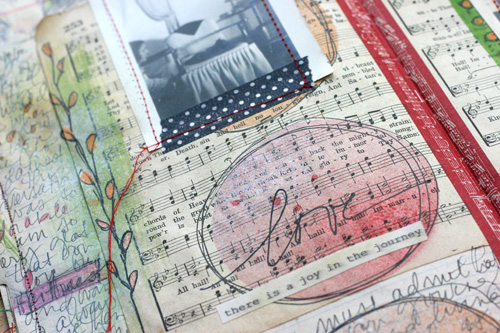 the circles were misted using an industrial sized toilet paper roll as the stencil.  i alternated studio calico piglet and maya road orange.  i also overlayed studio calico white over each.  i then loosely drew the circles around them with american crafts precision pen in .03.  the green you see is a wash made from a bit of jenni bowlin for ranger stick candy and seed packet acrylic paint mixed with water.  the doodled vine is the same pen plus some jenni bowlin for ranger chicken feed acrylic paint.  i also used some of gabriel's colored pencils here and there in the journaling.  i journal with an american crafts .01 precision pen. 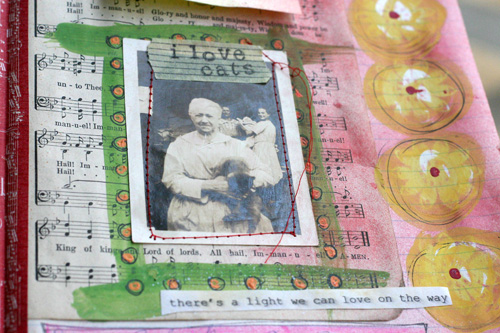 the frame here is brushed on with a foam brush and the same green paint wash from the left.  i then used the end of a paint brush dipped in jenni bowlin for ranger chicken feed paint to make the dots.  each is doodled with my .01 precision pen.  the circles on the right were created by first misting the piglet over some jbs doily flowers used as masks.  i then swirled a wash of jenni bowlin for ranger lemon drops and chicken feed mixed with water in a circle over each doily flower.  the centers are a dot of jenni bowlin for ranger chili powder using the end of a paint brush.  then again with the hand drawn circles.  i'm very much liking the circle effect and want use that on a scrapbook page soon.
Posted by doris sander at 7:01 PM