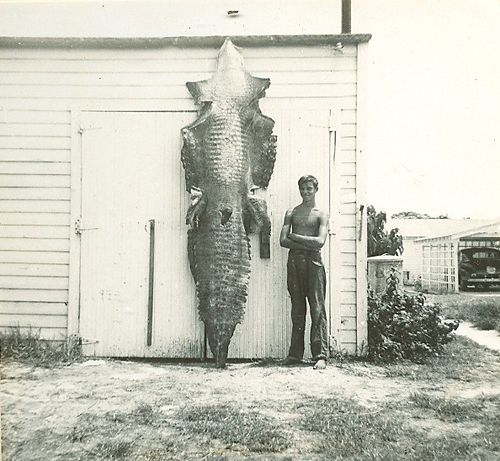 another project i hope to accomplish week by week this year is to get the stories written down for our family's old black and white photos.  i'll be starting with my dad's as i scanned those all in sometime last year.  we called him tonight to chitchat and get the story behind this one.  it's always been one of my favorites and even more so now since g and i have gotten addicted to watching swamp people.

it was the summer of '48.  papa was 17.  in the fall he'd begin his last year of high school.  he'd just moved from his dad's place in indiana to his mom's place in florida.  he'd visited florida most summers growing up, but had finally decided to stay.  hunting was good up north, but he found that the sea called to him.  papa had begun fishing with a boy who was to become his lifelong best friend.  a saltwater bayou in st. petersburg had recently been damned to create lake maggiore and the two boys had been given permission to clear out some trapped mullet in this newly formed lake.  enter the stub-tailed 11 1/2 foot gator.  the one that would have been a 12 foot gator if it hadn't had its tail bit off in its early days.  papa was afraid the gator would get caught in their mullet nets so he set out to catch it.  he put a pound of beef on a big hook and chain on the end of 50 feet of 1/2 inch rope.  the next morning the gator was on the hook.  his friend took the gator out with one shot of his 22.  papa skinned it.  papa said, "he shot it, but i instigated the whole thing."

i asked him how he knew how to skin a gator and he told me he'd skinned his first turtle when he was 10.  his dad wasn't around.  he'd caught it and they needed to eat it for dinner, so he skinned it and his mom fried it up.  he said, "i'd always done it.  coons, possums, muskrats, turtles, deer . . . the gator wasn't any different.  they're all animals."  the one photo brings to mind so many memories for him.  once while stationed in korea during the korean conflict, he was pulled off the front line to skin a musk deer that an officer had killed.  he recalled the musk deer had tusks like a wild hog.    when i was a child some friends called him up to come over and skin 3 sambar deer that had been shot when they swam to the mainland from st. vincent's island.  he said those deer were practically the size of horses.

the most recent memory from this photo is of that best friend from high school.  the one he shot the gator with.  he passed away a few years ago.  just last year my dad found out that he'd kept this picture with him in his wallet.  he carried the memory close and always present for close to 60 years.  sometimes words are inadequate.
Posted by doris sander at 10:52 PM

Email ThisBlogThis!Share to TwitterShare to FacebookShare to Pinterest
Labels: black and white