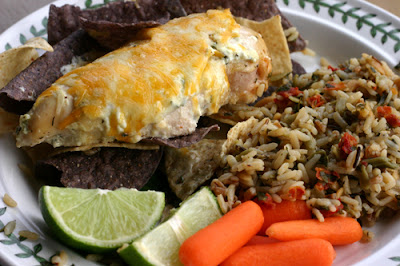 shockingly, i am enjoying this project more than i ever thought i would.  at least right now.  this week's photo op is "applebee's fiesta lime chicken."  i only found one version of it on every link i opened.  i guess it is THE version.  i'm sure it's wonderful, but honestly, i don't have the time, inclination, or financial means to deal with 20 ingredient recipes.  i modified.  and it was still wonderful.  two thumbs way up on this one.  i made the following changes to the recipe:

1. the first 8 ingredients made the marinade.  i substituted kroger's tequila lime 30 minute marinade.
2. i then baked my pound of nicely marinated skinless boneless chicken breasts at 400 for 30 minutes.
3. coat with white sauce and sprinkle with a bit of colby jack shredded cheese and bake till cheese melts.
4. serve on a bed of crushed tortilla chips with fresh lime to squeeze over and a side of mexican rice.

The "white sauce" in step two is a mix of the following ingredients with my changes in parenthesis:

i really was going to add the hot sauce, but somebody had used the last.  i found some taco sauce on my hot sauce search, but it had a "best if used by september 2011" marking, so i was hesitant.  mustard was the next zestiest thing, so mustard it was.

the chicken was pretty darn awesome.  will definitely be adding this one to the frequent rotation.  the only thing i'll change is my choice of a rice side.  i used uncle ben's sun-dried tomato florentine.  the lime and sun-dried tomatoes were in competition with each other.  i think the rice would be great with fish, but not the fiesta lime chicken.  next time i'll look for a more middle of the road mexican rice. 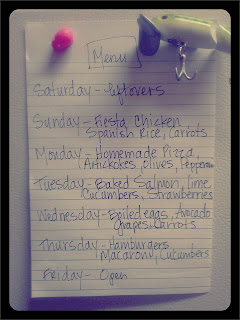 here's the plan for the rest of the week.  homemade pizza per g's request.  mostly easy stuff since we have cub scout meetings two nights this week.  and i've taken to posting the menu on the fridge so my little pork chop doesn't have to keep asking me what's for dinner.  :)
Posted by doris sander at 6:21 PM