a day in my life 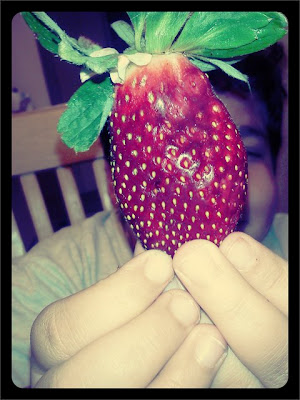 today is ali's big "day in the life" event.  while it's an extremely worthy endeavor, i've pretty much sworn off anything suggesting that i make more lists or take more photos this year.  my ocd tendencies needed a rest.  ironically, this day in particular has been quite a whirlwind and in retrospect is quite worthy of documentation.  and since i'm recording it in hindsight, i can easily find the humor in the myriad of moments that flashed before my eyes . . . all. day. looooooong.

6:00 (approximately 5:48 in real time - i'm one of those who keeps the alarm clock set ahead so i'm not late - this doesn't work in case you were wondering) - wake up.  lay in bed for another 20 minutes before getting up, thus ensuring that i'll be late even though my clothes are already ironed and ready to go.  no i'm not super prepper.  i'm wearing the same thing i put on monday and tuesday mornings.  see g was sick monday and tuesday and i had to get fully dressed and in the car both days before making the decision to come back in and put the jammies back on.

7:26 sign g in.  he wants to show off his cool new inhaler, but the nurse says no.  we must have a form signed by the doctor first.  and now i'm running late for my morning school.

8:05 i beat my kids to class.  go me.  i have 8 tests to help 4 students take.  we wade through the 2 physical science, 2 economics, and 1 biology.  i am one person and it was an abbreviated bell schedule.  the other 3 will have to wait till tomorrow.

11:03 ran a few teacher errands up and down the stairs in our three story building, dashed to g's school to let him puff on his super cool new inhaler in front of his little friends.  kissed him cuz he's cute.  made it to school #2 just five minutes late.  these abbreviated days are killer and the coke pit stop was unavoidable.  only have time to help two kids with english tests here before dashing off again.  tis the season for testing.

12:00 made it to the esl meeting at central office on time.  yes!  and many thanks to lillie for getting our subway (she was 5 minutes late, but who's counting - we had to eat!).  most excellent meeting.  and of course i multi-tasked by bulleting the important spots in the new vocab book our boss handed out.

2:30 meeting over a half hour early.  snag some extra ink cartridges and make a run for it.  pick g up from kids' club.  go through the bank drive through.  stop at walgreen's to get the doc's signature so g can take his super cool new inhaler to school friday.  grabbed 2 boxes of kleenex, crayons, colored pencils, a laser pen, and brown sugar while there.

4:30 i get a wild hair and cook dinner and clean the kitchen when we get home.  i made beer braised sirloin tips.  i used real mustard and no other spices except salt and pepper.  i don't really measure anything either.  added those grape tomatoes that were starting to shrivel.  oh and i used the wild berry wine cooler left over from cool renee's birthday instead of buying a beer.  i would have been terribly embarrassed to serve this to a guest in my home, but g's eating seconds.  actually, i think it would have turned out pretty decent if i'd realized i was turning the rice down instead of the beef as i intended.  oops.

6:51 and now i am lost in space.  i don't know where the last 2 hours have gone.  surely it doesn't take that long to cook and clean the kitchen?  i don't know if i'll find the motivation to be productive with my last 2 hours before bedtime.  life is a mystery. 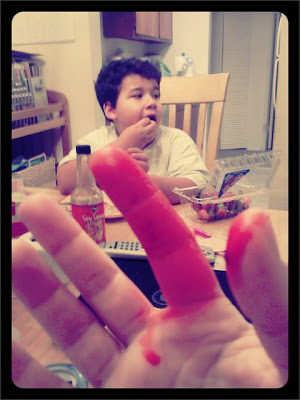 the red finger, however, is not a mystery.  it's not strawberry juice, a paring knife accident, or distress ink.  no.  this is what happens when the tropical punch crystal light refused to dissolve and i stick my finger down the neck of the bottle to try and force the issue.  nice.
Posted by doris sander at 6:56 PM