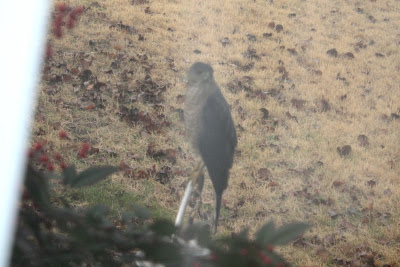 today's nature journal is brought to you via gchat courtesy of cool renee . . .

cool renee (cr):  are you a bird person?
me:  a bird person?
cr:  yea.  do you know bird species? there was a cat sized bird outside my window . . . don't know what it was.  took pics.
me:  wow!  send me a pic!
cr:  did you see it?!  another friend said hawk and another said owl.  i say "freaky."  stupid bird.  almost dropped my camera when it flew towards me.
me:  nope.  not an owl.  hawk.  freaky no.  it's COOL.  love hawks.  they're so regal.
cr:  your pretty hawk just attacked a bird in front of my window.  poor bird was screaming and i came out to see hawk carrying it away.
me:  survival of the fittest baby.
cr:  i am not mufasa.  take the circle of life next door please. 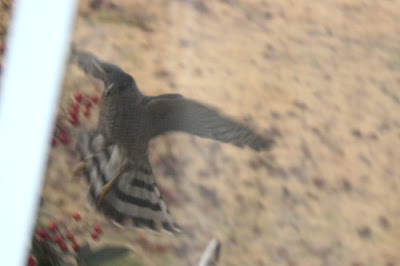 i would say that based on the gorgeous tail here and cool renee's observation of its behavior, this is a cooper's hawk.  this stream-lined flyer is built for speed and maneuverability as it zooms through heavily forested areas and captues smaller birds on the wing.