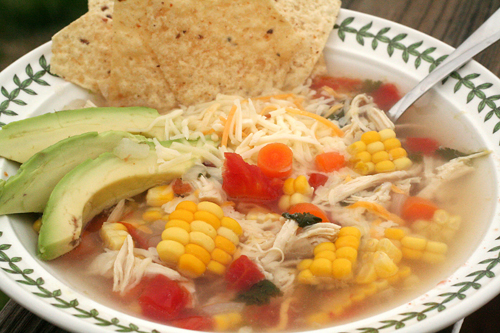 back to the menu plan, are we?  my friend chelle was over last night and as we were chatting, i laughed and told her i am an oxymoron.  an introverted exhibitionist.  i don't need nearly as much social interaction as the average human and only a slight fraction of what my son requires, but oh do i like to make a public display of myself.  so funny that.  so back to the public posting of the menu plan as that is very motivational for me.

i thought i'd share my tortilla soup recipe one more time, because i have perfected it and because, let's face it, i am no domestic goddess and in the kitchen i am pretty much a one hit wonder.

cook chicken, onion, cilantro, carrot, salt and pepper till chicken is done.  take chicken out and add rotel and corn on the cob.  when chicken is cool enough pull mean off bones, shred it, and return it to the pot.  take out corn on the cob, slice it off cob, and return it to the pot.  serve with your choice of tortilla chips, avocado, shredded cheese, and sour cream.

notes:  i've found that boiling the corn and then slicing it off causes the kernels to swell and stick together a bit even when they're cut off.  probably this doesn't affect the taste much, but i think it looks cool!

tip on freezing the extra cilantro can be found HERE.

and since blogging/scrapbooking a favorite recipe is one of the centipede challenges, i get another segment added to my centipede.  hooray!  :)
Posted by doris sander at 8:16 PM