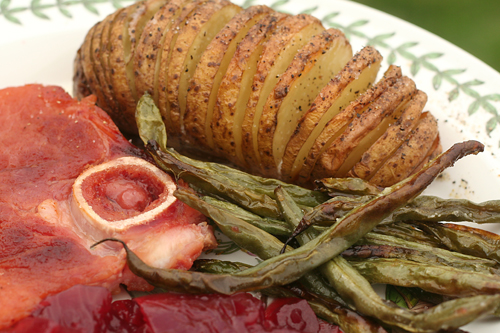 another pinterest recipe!  hooray!  these slice baked potatoes got an unsolicited, "these are kinda good" from g, which is high praise actually as potatoes have never been his favorite.  they were easy for him to eat; he would just pull the slices off and pop them in his mouth.  on a side note, i sure wouldn't eat potato skin at his age!  ha!  probably wouldn't eat cranberry sauce either!  or fresh green beans as i'd only eat those from a can.  my mom never baked them though.  hmmm . . .

i got the recipe HERE, but of course didn't follow it.  after slicing the potatoes, i drizzled the tops with evoo then sea salt and peppered them.  i spooned the olive oil back onto the tops from the bottom of the pan a couple times during baking.  the recipe says to bake them for 40ish minutes, but i ended up baking them for an hour and tenish minutes and wish i'd left them in another ten or so, but we were ready to eat already!  next time i will know to budget an hour and a half, twice the time the recipe calls for.